Tiffany Haddish and Rose Byrne team in a comedy of low risk and little imagination. 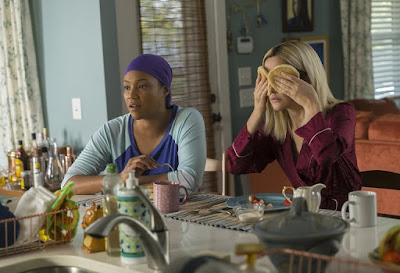 I worry about Tiffany Haddish. Since her hilarious movie breakthrough in 2017's Girls Trip, Haddish's career has — to use the vernacular — blown up. In addition to the new comedy Like a Boss, Haddish has several movies on tap, not to mention Black Mitzvah, a Netflix comedy special that’s currently playing.

So what troubles me? Just this: I hope that the movies can find a better fit for Hasddish than the wearying January release that I’m about to review. She’s funny. She can command the screen and she has acting chops. She deserves a showcase that transcends sub-sitcom level screenwriting.

I wouldn’t call Like a Boss a personal setback for Haddish, but — to put it bluntly — there’s a reason why the movie is slipping into theaters in January, a time of low big-screen expectations as awards expectation focuses on last year's releases.

As the first movie I've seen in 2020, Like a Boss sank me into a New Year’s funk. Here is a movie in which neither cast nor audience is being asked to go anyplace worth going, a waste.

Directed by Miguel Arteta, Like a Boss tells the story of two women: Haddish’s Mia and Rose Byrne’s Mel. Friends since middle school, the two women share a house and run a make-up company with two employees: Billy Porter and Jennifer Coolidge. Dubbed Mia and Mel, their company is on the verge of hitting the financial skids. Could an acquisition offer by a major cosmetics firm be the godsend they need?

Her hair died red, Salma Hayek portrays Claire Luna, the brash head of the cosmetics company. A ruthless entrepreneur, the cartoonish Luna obviously can’t be trusted. She walks through her lavish offices carrying a golf club, presumably in case a need to smash something should arise.

The script contrives to have the eager-to-please Mel and the fiercely independent Mia turn on one another as they try to figure out how to work for the dictatorial Luna, who threatens to take over their company and kick the both of them to the curb.

As high-concept premises go, this one’s built on shaky scaffolding that turns the movie into a low-grade formula job in which the only real energy comes from Haddish’s often ribald one-liners. Both Haddish and Byrne try their hands at physical comedy but the movie’s display of comic imagination operates at dismal levels. Witness the inclusion of a passé karaoke scene, jokes about pot, jokes about the male and female nether regions and a gag about an overly seasoned Mexican dish.

The actresses seem to be straining to bring comic life to the material. They're game, but no amount of make-up can cover the screenplay’s witless inadequacies.

Mel and Mia are committed to helping women bring out their inner glow, an ironic message for a movie that has no inner glow of its own and which is built around two characters who have been conceived by filmmakers who were unwilling to take even the slightest of risks with them.

So fingers crossed for Haddish going forward. Rose, of course, has her strengths. But the talented Haddish has no need for a sidekick and Like a Boss has even less reason to command much attention.