Sisters separated by treachery and deceit 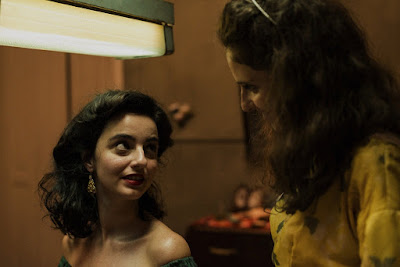 Although it occasionally surrenders to melodrama, Invisible Life remains solidly grounded in the reality of daily life in Rio de Janeiro. Setting his story in the 1950s, director Karim Ainouz follows the lives of two sisters, each suffering because of a tyrannical father.

Though united in spirit, the sisters are tragically separated when Guida (Julia Stockler), the wild-child sister, runs off with a Greek sailor, a choice that sends her life into decline. The more sedate Euridice (Carol Duarte) wants to study classical piano in Austria and has little interest in unleashing her sexuality.

The fates of both sisters are determined by their father (Antonio Fonesca), a baker who disowns Guida when she returns to Rio pregnant. He refuses to accept a daughter who will bring him a "bastard grandchild."

Ainouz takes his time developing the story but makes a point of allowing bursts of energy to break the movie's surface, Euridice wildly dancing at her wedding, for example. A less-than-erotic encounter between the bride and groom follows the celebration.

Even though Guida returns to Rio, her father never tells Euridice that her sister has come back to Brazil. He also lies to Guida, telling her that Euridice lives in Europe where she's pursuing a career as a pianist.

Although they're living in the same city, the sisters never meet; they almost encounter each other at a restaurant at one point, but they remain apart -- each assuming the other is living the life she dreamt of as a young woman.

Euridice plods unhappily through married life. For her part, Guida finds a home in one of Brazil's lower-class neighborhoods. She cares for her son and creates a kind of impromptu family with some of the residents.

The movie eventually deals with the lie that has separated the sisters. No fair saying more, but you probably can guess that the story will not resolve happily. In all, Invisible Life makes for a moving look at a bond that endures despite out-dated rules and a father's uncompromising rigidity.