Color Out of Space pits an isolated family against a force from outer space. 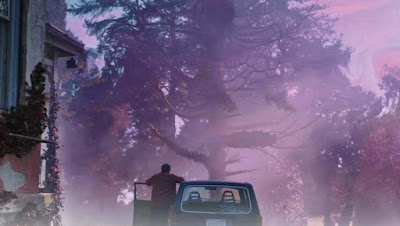 Director Richard Stanley’s Color Out of Space might have been another mediocre horror film and, I suppose, parts of it still deserve that description. In adapting a story by H.P. Lovecraft, Stanley introduces us to a family living in rural isolation.

But Stanley smartly uses Lovecraft’s story as a launching pad for another memorable Nicolas Cage performance and as an opportunity to serve up a heaping helping of weirdness. Now the undisputed champion of over-the-top crescendos, Cage appears at his terrifying, comic best.

Cage plays Nathan Gardner, the father of a family which includes a teenage son (Brendan Meyer) and a younger son (Julian Hilliard).

The rural life doesn't seem to be doing any of the Gardners much good. Daughter Lavinia (Madeleine Arthur) dabbles in witchcraft. As she recovers from cancer surgery, Mom (Joely Richardson) battles the balky Internet connection that threatens to sink her investment-advisory business.

The already skewed family life of the Gardners is further upset when a mysterious flaming object lands in their yard. The object emits an eerie glow that may be a threatening alien life form. Plants begin to turn colors and various misfortunes befall the members of Nathan’s family. Deviations from the norm further compound: An insect the size of a football appears. The youngest son starts having conversations with characters no one else sees.

Stanley works with juxtapositions that border on the absurd: Lavinia’s witchy aspirations, dad’s preoccupation with the alpacas that he’s purchased as a possible source of revenue and the arrival of a very sincere hydrologist (Elliot Knight) who’s surveying the area.

The only other person living on Nathanial’s property is a squatter (Tommy Chong), an aging hippie who plays the role of deranged profit.

Cage — who’s playing a character who defies definition from the start -- eventually made me wonder if he weren’t using his performance to comment on the sheer insanity of what we’re watching. I decided he wasn't.

Most times, if you have questions about what an actor might be doing, you feel frustrated and deflated. In Cage's case, this uncertainty is precisely where he lives. He doesn't try to get laughs with a line reading; he just says the line and it comes out funny. In this case, he's playing a character who tries to normalize the most bizarre of occurrences, but with barely concealed undercurrents of madness that could, at any moment, tilt toward violence.

Stanely has fun with the movie's images, notably color settling over rural landscapes like a fog, some version of pink, I think. And, yes, blood and gore are given their due.

You can attach larger meanings to all of this if you want, an assault on the naive values of self-sufficiency and middle-class escapism, perhaps. But I chose to take Color Out of Space as a bizarre entertainment that gave me the creeps and made me laugh.

Stanley’s career aside, Color Out of Space makes for one of those irresistibly strange movies that leave your head buzzing. When you exit the theater, the world may look a little weirder than when you arrived. That's a form of success.