In her last film, Agnes Varda reviews her art 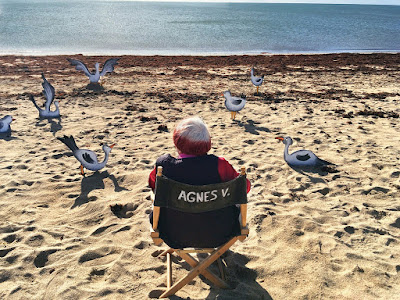 I'm guessing that when Agnes Varda, who died last March at the age of 90, began assembling Varda by Varda, she might have sensed that she was writing her own obituary. The result: a biography of a creative life.

That's not to say that there's anything morbid, self-congratulatory or nostalgic about Varda's movie. Varda by Varda turns out to be a catalog of an artist's process of invention -- not in any self-serving way, but in a manner that underscores Varda's commitment to an idea: Creation should be shared. Her final movie can be taken as an act of generosity. She had things to tell us.

At times, Varda can be seen talking to audiences as if to underscore that she's not interested in solitary reflection. As always, Varda insists on engagement.

Varda uses clips from many of her films, analyzing them and explaining how they developed. Among the features she discusses: Cleo from 5 to 7 and Vagabond.

We learn that Varda's later documentary work tended to rely on streamlined, simplified production methods, sometimes only the director and a small video camera that she operated. Varda followed her eye where it took her, often capitalizing on serendipitous moments that found her camera.

In her last decade, Varda branched out from filmmaking to become what she calls a "visual artist." Her installations can be whimsical or sharp -- or both. They make you understand that only death could have halted Varda’s voracious interest in the world around her, in things that can be seen or touched and, above all, captured with a camera. Even in old age, Varda's eyes remained open to new possibilities.

As an artist, she never stopped growing.