Will Smith and Martin Lawrence deliver for viewers who like these kinds of formula jobs. 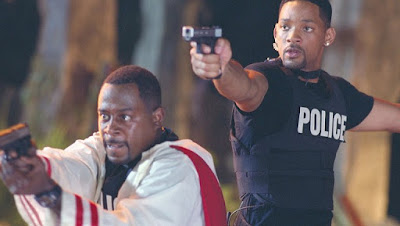 Bad Boys for Life includes a late-picture plot twist so preposterous and far-fetched that it practically wraps itself in immunity from criticism. It's as if the filmmakers are saying, "Hey, you've come this far, might as well go along with the rest."

With this third in the Bad Boy series, which began in 1995 and continued with a sequel in 2003, Will Smith and Martin Lawrence attempt to reclaim box-office potency and prove that buddy movies, even in re-treaded form, are as much big-screen staple as corn is to American agriculture.

Director Michael Bay, at the helm for the first two movies, cedes directing chores to Adil El Arbi and Bilall Fallah, a duo that lives in Belgium. They approach the challenge with something approaching cheerful brio.

Now, it needs to be said at the outset that any movie that looks for its juice from Mexican drug cartels, which Bad Boys for Life does, already feels a trifle old hat. But Arbi and Fallah don’t seem to care. For them, it's pedal to the metal and full speed ahead.

The directors must have known that they’ve been charged with ensuring, as many critics previously have noted, that thair movie includes ample amounts of bullets and banter, both of which they ladle out in over-sized helpings.

On the way out of a preview screening, an audience member described the movie as “fun.” That's what movies such as Bad Boys for Life are supposed to provide — fun with bloodshed or maybe it's the reverse, bloodshed with fun.

To be fair, Bad Boys for Life does provide some fun. The banter between Will Smith’s Mike and Martin Lawrence’s Marcus ranges from funny to routine. Smith, of course, plays the serious cop; Lawrence provides the comic relief as a Miami detective who wants to retire, particularly after a mysterious assassin riddles Mike with bullets in the movie’s early going.

Though badly wounded, Mike makes a miraculous recovery. He then decides that he must find the motorcycle-riding murderer who gunned him down in the street. Of course, he wants Marcus to join him.

No, says Marcus, who insists on hanging up his badge so that he can watch his infant grandson grow up. Besides, when Mike was hovering near death in the hospital, Marcus promised God that he wouldn’t commit any more violent acts if Mike pulled through.

Will Marcus finally relent? What do you think?

A wary police captain (Joe Pantoliano) half-heartedly tells Mike not to investigate his own case, but even he knows that Mike won't listen. In movies such as this, no one gets in the way of the formula.

That doesn't mean the filmmakers can't accessorize. The screenplay surrounds Mike and Marcus with a kind of tech-savvy IM Force led by Miami cop played by Paola Nunez. She and Mike once had a thing.

As it turns out, the plot against Mike has been authored by the vicious widow (Kate del Castillo) of a drug lord who Mike helped bring down. The widow insists that her equally brutal and maniacally focused son (Jacob Scipio) make Mike suffer before killing him.

If you have no taste for this kind of mayhem, Bad Boys for Life gives you no reason to expand your window of tolerance.

If, on the other hand, you're up for a well-oiled big-screen machine that gives Smith a chance to mix dead-pan seriousness with a bit of charm and eventually makes room for Lawrence to find his way to some real laughs, you could do worse.

Bad Boys for Life provides the expected jokes about aging, but a teaser that runs during the film’s end credits suggests that we take the title seriously. Smith and Lawrence may be in it for the duration.