Director Guy Ritchie may not be breaking new ground in The Gentlemen, but his actors provide the movie with some juice. 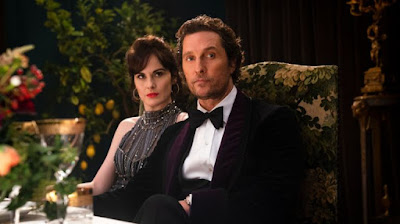 If the year were 1999 instead of 2020, director Guy Ritchie’s The Gentlemen might have seemed more inventive. Ritchie, you'll recall, made his cinematic bones with 1998’s Lock, Stock and Two Smoking Barrels, a fresh-feeling foray into a netherworld occupied by British gangsters.

In this outing, Ritchie again goes gangster but the verve that once defined Ritchie's style now feels a little proforma, something on the order of the difference between an arranged marriage and a spontaneous love affair.

After striking out with King Arthur (2017), it’s not surprising that Ritchie sought comfortable ground — and, to be fair, The Gentlemen derives a fair measure of entertainment from a spot-on cast.

Notable among a large ensemble is Hugh Grant, playing a sleazy, gay private detective with traces of cockney in his accent. Colin Farrell adds more color as Coach, a character who trains boxers and occasionally dips into the dark arts required to settle matters in the criminal world.

Add an unflappable Charlie Hunnam to the mix. Hunnam rides shotgun to Matthew McConaughey, who plays Mickey, a pot czar who pays off fading aristocrats for the privilege of building vast underground grow houses on their property.

Now another American (Jeremy Strong) wants to buy Mickey's vast empire so that he can reap illegal gains and be ready to capitalize when marijuana goes legit. Tired of life in the fast lane, Mickey may be willing to sell.

A Chinese gangster named Dry Eye (Henry Golding) also would like to purchase Mickey’s business, an ambition that sets off fireworks, notably a raid on one of Mickey’s mammoth facilities.

To add structural pizazz, Ritchie frames the story by having Grant’s character try to extort money from Hunnam’s character, using a screenplay to convince Ray to pay up. The screenplay gambit proves a bit much, even in a movie that's not afraid to display its cinematic self-consciousness.

True to its title, The Gentlemen is mostly an all-guys affair, although the dashing Mickey has a greyhound sleek wife (Michelle Dockery) who runs a garage staffed by many female mechanics. Mickey, we're told, relies on her judgment.

It takes time to get all the characters straight and to fully appreciate The Gentlemen, you need a taste for a narrative that hopscotches through the proceedings, sometimes creating confusion. You also may find yourself wondering whether any of these characters possibly could exist outside a Guy Ritchie movie.

Still, there’s pleasure in watching actors sink into juicy roles as we wait to see who among these felons will emerge as the king of the gangster jungle. In January, that may as good as we get.