Kids and cops clash in a Parisian suburb 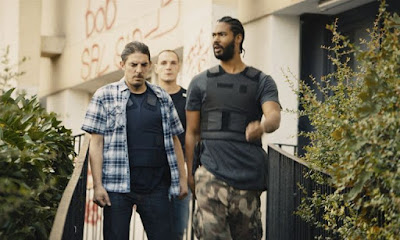 All aspiring artists hear it, the injunction that urges them to begin with what they know.

Like most advice, there’s nothing sacrosanct about it, but in the case of French director Ladj Ly, familiarity with his subject (the hard life in the commune of Montfermeil outside Paris) gives his version of Les Miserables plenty of gritty authenticity.

The movie begins in jubilation. A kid from the neighborhood (Issa Perica) wraps himself in a Tricolor cape and gathers his pals for a trip into the heart of Paris. It’s the day in 2018 when the French win the World Cup and Ly’s camera captures the pure exaltation of fans celebrating a longed-for victory. At that point, the kids are French through and through.

But as children of African immigrants that status won’t survive. Set during a single day, Les Miserables revolves around tense interactions between three cops (Alexis Manenti, Djibril Zonga, and Damien Bonnard), the kids we saw in the opening scenes and other figures in the neighborhood. These include the district’s mayor (Steve Tientcheu), a man who keeps order, as well as various members of the Muslim Brotherhood, an organization that tries to guide the kids toward the local mosque.

The cops approach their work with distinctly different attitudes. The worst of them is Manenti’s Chris, a police officer who happily accepts the name he’s been given by residents of the neighborhood he patrols: The call him “The Pink Pig.” Often arbitrary and cruel, Chris justifies his behavior by blaming it on the mean streets he patrols. He sees his cruelty as a necessity, not a choice. Zonga’s Gwada isn’t as narrow-minded as Chris, but he goes along with the program.

Bonnard plays a newcomer on his first day on the job. Chris demeans him with the nickname Greaser and does his best to exert his authority over the newbie. It quickly becomes apparent that Bonnard’s Stephane will act as the movie’s conscience, as well as the audience’s entry point into a rough-and-tumble world where the police are viewed as a clear enemy and where the neighborhood has its own rules, most of them ignored by the kids.

A kid with big eyeglasses (Al-Hassan Ly) serves as a witness to the various episodes that make up the movie: He shoots video of the neighborhood with a drone that captures the incident that will bring the movie to a violent boiling point.

More turmoil results when Issa steals a lion cub from a circus run by gypsies. The cops of the anti-crime squad try to find the lion to stave off a war between the gypsies and the gangs of Montfermeil.

As I said at the outset, Ly knows this terrain. He grew up in the Montfermeil area and drew on his experiences to make his movie, and we often feel his anger at the way these immigrants have been marginalized. The pressures squeezing a hot-house neighborhood — a creation of prejudice on the part of the larger society — becomes the movie’s real subject.

American audiences familiar with gritty street-level drama may find the movie a bit familiar, but there’s no escaping Ly’s conclusion: Those relegated to France’s banlieues are living in pressure cookers. We all know how the metaphor works. When pressure cookers overheat, they tend to explode.