Taken individually, the short films in this year's Oscar program are all refreshingly concise; i.e., no more than 40 minutes in length. But the only way these shorts can be seen is in packages, five films in each serving. Although this kind of presentation is unavoidable, the approach can be frustrating.

Watching five films in succession leaves little time to digest what you've seen. No sooner has one film finished than you're asked to involve yourself in another. I think this hurts high-impact films, particularly those in the documentary-shorts category.

The short documentary In the Absence, for example, examines a series of inept decisions that made the Sewol ferry disaster of 2014 even worse. You'll recall that 300 people died in that Korean ferry accident. High school students on a field trip made up the bulk of the casualties. Watching Absence in the same program as the charming Walk Run Cha-Cha can make your head spin.

Even in the animated category, wild tonal shifts can be found as one film gives way to another. Memorable, director Bruno Collet's touching look at a painter suffering from Alzheimer's bumps up against Matthew A. Cherry's Hair Love, a story about an African-American father struggling to master the art of combing his daughter's hair. Hair Love, by the way, might be the most buoyant of the animated shorts, although it, too, strikes some serious notes.

Of course, there's a flip side to what I'm saying. These packages of Oscar-nominated short films provide a window into an astonishing range of approaches and interests. Shorts also constitute one of the few areas where you can be reasonably sure that filmmakers are following their interests rather than the usual commercial imperatives.

And in a moment when few features run less than two hours, shorts also remind us that brevity needn't be an obstacle to telling a meaningful story. 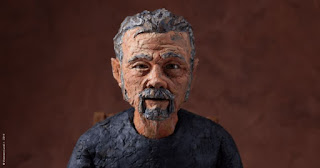 This year's animated shorts stuck me as less self-consciously arty than those of previous years, although they often traverse difficult emotional terrain. Siqi Song's Sister can be viewed as a companion piece of Nanfu Wang's documentary One Child Nation. Song explores the impact of China's one-child policy on a boy who imagines what his life might have been had he had a sister.

Director Daria Kascheeva's Daughter employs stop-action animation to create a story about a woman who remembers her difficult relationship with her father while he lies on his deathbed. Kashcheeva sculpts her characters from paper mache, a technique that gives the movie a heavy, somber feeling that perfectly fits its subject.

I already mentioned Hair Love and Memorable, so I'll move to Kitbull, an entry from Rosana Sullivan who has worked for Pixar; Sullivan introduces us to a scraggly stray cat who befriends an abused pit bull, an unlikely friendship that carries obvious metaphoric weight.

I've always found it difficult to predict winners in the shorts category, so I'm not going to try, although I'll tell you that my favorite is Collet's Memorable, which depicts an artist losing touch with his two principal loves, his wife and his art.

Live-Action Shorts
As I watched Saria -- a recreation of a real-life story -- I had to remind myself that I wasn't watching a documentary. This speaks to the film's power. Director Bryan Buckley doesn't flinch from a difficult topic and the ending of his film packs a horrific wallop.

Belgium's A Sister, directed by Delphine Girard, almost instantly becomes an exercise in high tension. A woman who has been kidnapped tricks her abductor into allowing her to call her sister to check in on her daughter. Instead of phoning her sister, she reaches a police emergency operator who plays along and tries to save the woman.

Marshall Curry's The Neighbors' Window begins as if it's going to be a kinky study of voyeurism. Initially attracted to watching a couple's lovemaking, a New York husband and wife continue to observe the lives of two people occupying the apartment across the street from them. The story increasingly focuses on the prying wife -- a mother dealing with three small children -- who becomes obsessed with what she sees the couple's freedom. You may be able to guess where Curry's story is headed, but the movie succinctly makes its point. And, no, the moral of the tale has nothing to do with the wisdom of buying curtains.

Directed by Meryam Joobeur and Maria Gracia Turgeon, Brotherhood takes us to Tunisia for a story about tensions between a father and a son, a young man who left home to join fighters in Syria. The son returns with a pregnant young woman who's hidden by a niqab and who he introduces as his wife. Faced with terrible unemployment, many of Tunisia's young men left for Syria and, as is the case here, many came to regret their decision. The relationship between the returning son and his brothers proves touching as the story builds toward a tragic conclusion that left me with questions about precisely what the filmmakers were trying to say. 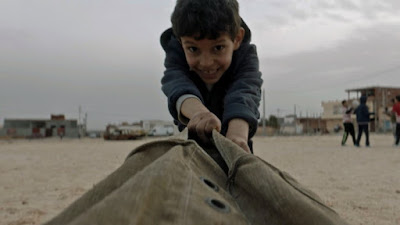 Yves Piat and Damien Megherbi may have made the category's prohibitive favorite, the amusing NEFTA Football Club, which also takes place in Tunisia. While playing in the desert, two brothers discover a lost donkey that's wandering about wearing a set of earphones. We'll later learn what the earphones are about, but the story reveals its first twist when the older brother realizes that the donkey is carrying bags full of drugs. Could this be a gateway to a huge windfall? Obstacles and various O. Henry-like turns make the film instructive and entertaining. 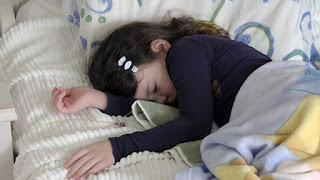 Ever heard of Resignation Syndrome? I hadn't, but I learned about it while watching John Haptas and Kristine Samuelson's Life Overtakes Me, the moving story of eastern European children who fall into catatonic states as a way avoiding tensions resulting from constant threats of deportation from Sweden, the country to which their parents have fled.

In Laura Nix's Walk Run Cha-Cha, we meet a Vietnamese couple that arrived in the U.S. 40 years ago. Paul and Millie Cao talk about leaving Vietnam, being reunited in the US and living lives built around work and family. After raising their kids and meeting their responsibilities, Paul and Millie take up dancing. Finally, they feel a measure of true personal freedom.

As mentioned earlier, Yi Seung-Jun's In the Absence explores the tragic story of a ferry accident. I'd say that Jun's film has more emotional punch than the others in this category, which rounds out with Smriti Mundhra and Sami Khan's St. Louis Superman and Carol Dysinger's Learning to Skateboard in a Warzone (if you're a girl).

St. Louis Superman introduces us to Bruce Franks, a father and rapper who runs for a spot in the Missouri State legislature after the shooting that roiled Ferguson, Mo., in 2014.

In Learning to Skateboard, Dysinger tells the story of an Afghan program that uses skateboarding to help instill confidence in girls who also receive instruction in reading and math, sometimes against the wishes of parents who either fear for their daughters safety or have tradition-bound ideas about what girls should be doing with their time.

If you have the time, you’d do well to see all three programs. You’ll be informed and entertained, but you’ll also be helping to support a form of cinematic expression that’s a vital part of film culture. You'll also notice that unlike some of the other Oscar categories, women are well-represented.