A mobster turns agains the mob 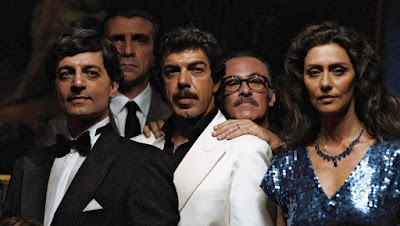 We haven't exactly been suffering from a shortage of mafia movies but director Marco Bellocchio’s The Traitor is a Cosa Nostra movie with a difference. Bellocchio centers his story on a real-life figure -- Tommaso Buscetta, the Sicilian gangster who in the 1980s made history when he testified against his former brothers in crime.

Not surprisingly, Buscetta’s foes thought he was a rat. But Buscetta, played with commanding power by Pierfrancesco Favino, maintained that he had remained loyal to the governing ethos of Cosa Nostra. He believed that the mob's entry into the heroin trade had helped plunge it into levels of brutality that went beyond anything that might be justified by loyalty or business.

When the movie begins, two rival Sicilian families meet in Palermo to forge a truce. Buscetta’s group reaches an accord with the Corleone mob, a group named for the Sicilian town where its operation has its headquarters. After the truce, which no one seems to take seriously, Buscetta heads to Brazil, where he also conducts business. He hopes to escape whatever bloodbath will follow.

The "peace" negotiations involved Buscetta's family. One of Buscetta's sons from a previous marriage had become addicted to heroin. The addicted son and his brother weren't supposed to be harmed after Buscetta left the country. Fat chance.

Buscetta eventually was arrested in Rio. The police dangled his third wife (Christina Fernanda Candido) from a helicopter while he was made to watch from another chopper. The presumably cornered, Buscetta had a change of heart. He was extradited to Italy, where he decided to testify against the mafia.

As the story unfolds, Buscetta develops a respectful relationship with the prosecutor who was trying to bring down the mob. The prosecutorial team was led by Giovanni Falcone (Fausto Russo Alesi), an attorney who later lost his life in a mob-engineered explosion.

After his initial testimony, Buscetta and his wife (safe after her helicopter torment) were sent to the US and placed in the witness protection program. But Buscetta's grudging respect for Falcone led to his return to Italy to help nail Salvatore Riina (Nicola Cali), the head of the Corleone faction.

Rina prides himself on propriety and family values but turns out to be one of the more vicious members of Cosa Nostra. Buscetta hates what he sees as Riina’s s hypocrisy.

But make no mistake. Buscetta is no angel. He's less interested in doing the right thing than in finding a path on which he can take vengeance against former cohorts and save his own skin. He's never less than unremittingly tough.

Bellocchio tells the story with flashbacks and courtroom scenes. In the courtroom, the mobsters who were about to be convicted based on Buscetta’s testimony were held in cells at the back of the room. They had no interest in decorum and frequently shouted profanities at their accuser.

Bellocchio isn’t interested in following a mob-movie blueprint. He’s telling a real story, which may have more meaning to Italian audiences than to the American art-house crowd. He covers a long period. Italy’s famed mafia trails lasted six years - from 1986 to 1992. That makes The Traitor a kind of procedural epic.

It may take a few scenes for audiences to settle into the movie, but Bellocchio has taken an unblinkered look at a man who helped make the mob and ultimately decided to bring it down.