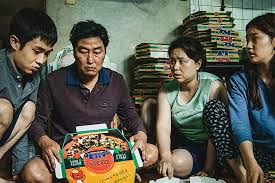 On the night that Parasite was shown to critics in Denver, only two of us attended the screening. As a fan of director Bong Joon Ho's work, I chose Parasite over another movie that was being screened on the same evening.

As much as I loved Bong's film, it never occurred to me that it would win four Oscars, including best director and best picture -- the first foreign-language film to take that coveted honor. A subtitled movie from South Korea, Parasite included enough accessible comedy to make me think it might expand Bong's audience, but best picture? It never crossed my mind. Beyond that, Parasite is a satirically charged film about class warfare, hardly an inspirational subject for an image-conscious industry.

Those who don't know Bong's work, at a minimum, should take a look at The Host (2006), Snowpiercer (2013) and Okja (2017). Snowpiercer, of course, was an English-language film with a cast that included Chris Evans, Tilda Swinton, and Ed Harris.

Still, Bong hadn't made the kind of films that typically find their way to Oscar's center stage. Idiosyncratic and immensely talented, Bong's work has been something of an acquired taste.

The victory of Parasite only reinforces my belief that the Oscars ought to go global and shed the newly named "best international feature" category.

Although it got no Oscar love beyond a nomination in the best-international-feature category, the Polish film Copus Christi strikes me as far more interesting than, say, Ford v Ferrari, which did receive a best-picture nod. Ford v Ferrari is an entertaining movie, but I wouldn't call it "exceptional."

Like many others, I thought 1917, the presumed frontrunner for best picture, would have a great Oscar night. Ditto for its director Sam Mendes. Although the movie won three Oscars, including a best-cinematography Oscar for Roger Deakins, 1917 missed out on the biggest prizes.

Upsets aside, I'm reluctant to draw any major conclusions: Oscar is a fickle beast and there's no point thinking that this year will set any precedents. The leap from last year's best picture -- Green Book -- to this year's winner demonstrates that every Oscar year creates its own moment.

So what about the night?

Overall it was a decent -- if somewhat pulseless -- Oscar show, the only real thrill arriving at the end.

Still, there were a few surprises.

The shock of watching Parasite ascend almost obliterated the memory of Joaquin Phoenix's acceptance speech when he won a best-actor Oscar for Joker. Phoenix delivered a hushed defense of the natural world along with a plea that we stop molesting it. He also described himself as a "scoundrel," a difficult and selfish guy who was grateful for receiving a second chance to do the work he loves. Messages aside, there was a pained sincerity in Phoenix's speech I found touching, a sense that the world was in too much trouble for him to manage a smile about a victory.

You might wonder why Eminem was at the Oscars. He performed Lose Yourself from the film 8 Mile. The song won an Oscar in 2002. Eminem didn't show up. His appearance on this year's show was a closely guarded secret.

Janelle Monae got the show off to a rousing start. Her version of Mister Rogers' A Beautiful Day in the Neighborhood morphed into a robust number that made reference to the biggest criticism Oscar has taken this year: its lack of women and people of color in so many categories. Monae also said that she was proud to be a "black queer artist telling stories."

Still, diversity seemed a kind of ornament at an Oscar ceremony in a year in which only one black person -- Cynthia Erivo of Harriet -- was nominated in any of the Academy's many acting slots.

There were smatterings of politics. Brad Pitt won an Oscar as best supporting actor for his work in Once Upon a Time in Hollywood and took the opportunity to say that his allotted 45 seconds for an acceptance speech were more than the Senate allowed for John Bolton to testify during the recently concluded trial of ... well ... you know who.

In all, though, the evening seemed to flow along smoothly with comedy coming from Steve Martin and Chris Rock, who were teamed during the show's opening, almost as if they were meant to evoke memories of the days when Oscar did have hosts. Maya Rudolph and Kristen Wiig, both brilliant, showed up later. Rebel Wilson and James Cordon, both of whom were in the much-maligned big-screen version of Cats, made fun of the movie but I'm sick of Cats humor. The movie stunk. Let's move on.

For me, though, nothing about the evening surpassed its conclusion. I can't remember a time when the film that won the Oscar for best picture was the same film that found itself on the top of my 10-best list of movies, a further indication that the world continues to move beyond comprehension. Maybe we should all join Bong Joon Ho who said that the remainder of his evening included some serious partying. On the other hand, I think I'll just call it a night.

Email ThisBlogThis!Share to TwitterShare to FacebookShare to Pinterest
Labels: it's a shock., Parasite triumphs. Yes, Reaction to 2020 Oscar ceremonies