Incitement unfolds with urgency and an increasing sense of dread. 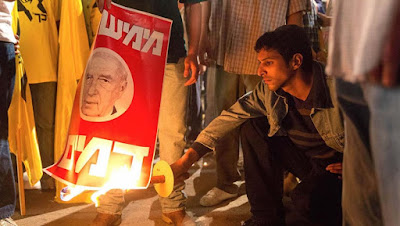 The world of a committed assassin is not a pleasant place to be but it’s sometimes necessary to penetrate it, partly out of a desire to understand how an assassin sees the society that, in his view, has pushed him toward the act he deems to be necessary; i.e., murder. He may see killing as a duty that has fallen to him, a task only he has the courage and commitment to carry out.

In Nov. of 1995, one such true believer — a young man named Yigal Amir — assassinated Israeli prime minister Yitzhak Rabin, a leader who had riled the Israeli right by entering a Clinton-brokered peace agreement with Yasser Arafat. There were Israelis who saw Rabin as a traitor. Amir was one of them but his beliefs went beyond the inflamed rhetoric of aggrieved dissent.

In his movie Incitement, director Yaron Zilberman shows us precisely how Amir evolved from being a law student with a future to an assassin who'd spend the rest of his life in prison. From the start, we know how the movie’s going to end. That means that Zilberman must be entirely convincing in creating the environment in which Amir’s murderous plan is hatched.

If we’re going to spend time with Amir, he can’t be an entirely repulsive figure. In a masterful performance, Yehuda Nahari Halevi shows us a sincere believer who aligned himself with radical extremists. At one point, Amir canvases a group of rabbis in hopes that one of them will agree that his plan is more than an example of demented politics. He argues that Rabin’s murder is mandated by Jewish law. The rabbis don't endorse his view, but they don't report him either.

Amir is the son of Yemeni parents who are looked down upon by some of the country’s Eastern European Jews. He's ripe for rejection.

At one point, Amir tries to start a relationship with a young woman (Daniella Kertesz) who lives in a West Bank settlement. He's ready to leap into marriage. Her parents don’t take it to him.

Amir's mother isn't shy about expressing her biases. She thinks her son should confine himself to the Orthodox Yemenite community. A more complex figure, his father thinks that the Oslo Accords may not be perfect but, at least, represent hope for peace. His father believes Amir lost his sensitivity while serving in the military. He became staunch.

But Amir is too far gone to listen to his father. He reveres Baruch Goldstein, the Israeli who in 1994 murdered 29 praying Muslims in Hebron. He hopes to establish a militia to act in instances where the Israeli Defense Force must exercise restraint. The fire in Halevi's eyes never lets us forget that Amir is a zealot; i.e., someone who lacks the ability to doubt his own beliefs.

Zilberman enhances the movie's urgency by skillfully using news clips from the period. And, of course, with an assassination looming, dread thickens as the story progresses.

Incitement delivers a strong cautionary warning about the perils of fanaticism and it shows what happens when an already motivated young man begins to create a world governed by his passions and reinforced by others who would never act violently but who share his beliefs. They’re the forest in which the tree of Amir's twisted conviction grows. Be wary.

Posted by Robert Denerstein at 8:30 PM