It’s all ‘Downhill’ from here

Julia Louis-Dreyfus and Will Ferrell star in an American remake of a much better Swedish movie. 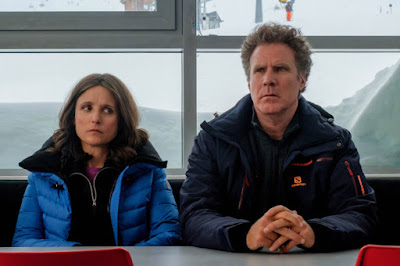 What didn’t make sense in 2014’s Force Majeure, a film from Swedish director Ruben Ostlund, makes even less sense in Downhill, an American remake starring Julia Louis-Dreyfus and Will Ferrell. Though still set in Europe, this American version suffers from one of the worst things that can happen to a film: indecision about what it wants to be.

Hovering in limbo between comedy and drama, Downhill won't be helped by audience expectations. Both Louis-Dreyfus and Ferrell are gifted comic actors and you can’t fault an audience for expecting some major laughs, particularly when the film’s trailer plays up moments that can be read as comedy.

At heart, though, Force Majeure was a film about a failing marriage. It explored issues of manhood and fatherhood and tried to understand the mentality of a middle-aged man who was drifting away from his wife and two children. That movie’s darkly comic elements have absorbed too much sunlight in this meager translation. Though brightened, the comic moments feel as slushy as melting snow.

The dynamic of a troubled marriage remains in directors Nat Faxon and Jim Rash’s version of the film, but it has lost the subtle flavors that helped elevate Force Majeure.

As with the original, the story revolves around a pivotal event. Louis-Dreyfus’ Billie and Ferrell’s Pete are the mother and father of an American family that has traveled to Europe to ski and regroup.

On a break from the slopes, Billie and Pete are having lunch with their two young sons (Julian Grey and Ammon Jacob Ford). An explosion is heard in the distance. A controlled avalanche has been set off, not an unusual occurrence at ski resorts.

Suddenly, though, a large cloud of snow descends on the restaurant. It doesn’t look as if it's going to stop. Those dining on the outdoor deck where the family is eating scream in panic. Ferrell’s Pete grabs his phone and runs, leaving his family behind.

As it turns out, everyone’s safe but major questions linger. Why did Pete run? What did his flight mean? Can his marriage survive this act of cowardice? Should it?

The growing tension between Billie and Pete proves as annoying as it is revealing with Louis-Dreyfus drawing sharper lines than Ferrell, whose character often seems a trifle pathetic. The fact that Ferrell is considerably taller than Louis-Dreyfuss creates a kind of jarring visual contrast that doesn’t help, either.

The story introduces a few supporting characters. Zach Woods and Zoe Chao play a touring couple. Pete knows Woods' character from the States. Eager to escape the routine of a family trip, Pete asks the couple to visit. The blind-sided Billie doesn't want company. She views the trip as an opportunity for the family to renew bonds that were fraying in the wake of Pete's grief over his father's recent death.

Miranda Otto shows up as a concierge, an out-sized bombshell of a character who espouses sexual freedom; Otto's Charlotte splashes through the movie like a tipped-over can of paint.

Individually, Louis-Dreyfus and Ferrell do some interesting things, but both struggle to find the right rhythm for material that’s not sure whether to go for laughs or dive into the messy world of a foundering marriage. Not surprisingly, Downhill doesn't do much of either.