Looking forward to the end of Awards season 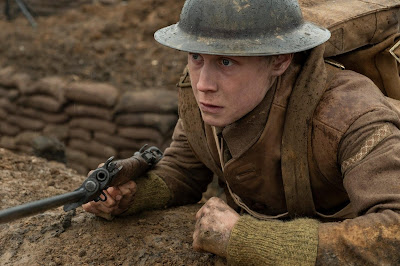 What to say about the Oscars?

To me, the best thing one can say about the upcoming Oscars is that, like clouds over a picnic, they will pass. When the awards are handed out next Sunday, we finally can put a lid on the 2019 cinema year. A change of the calendar doesn't automatically signal improvement of cinema culture, but, at least, we'll be able to focus on the ephemera of the day. And, truth be told, most movies are part of a non-stop barrage of disposable amusements, baubles hauled out to be perused, praised or rejected — and, in most cases, forgotten.

Even awards aren’t immune from the cruelties that result from the perpetual motion of the entertainment assembly line.

How long, for example, will you be eager to meet with friends for a glass of wine so that you can discuss cinematographer Roger Deakins’ career after he wins this year’s best cinematography award? Deakins, you'll recall, helped to create the nearly surreal images that made the World War I movie, 1917, so haunting.

Or do you imagine yourself in heated conversations about the best original screenplay? Who writes a better screenplay, Quentin Tarantino (Once Upon a Time in Hollywood) or Noah Baumbach (Marriage Story)? And what the hell is a great screenplay anyway?

Think how different Marriage Story would have been had the LA LA Land duo — Ryan Gosling and Emma Stone — played the self-absorbed husband and the blossoming wife. Can we believe, as actors sometimes say, that “it’s all in the text?”

If I were going to have any posts-Oscar discussions, they would have something to do with the way Robert DeNiro, Martin Scorsese, Al Pacino and Joe Pesci seem to have aged out of Oscar consideration. In many ways, The Irishman was more than a story of corruption, mobsters and the murder of Teamster czar Jimmy Hoffa; it was also a goodbye to youth from actors and a director who probably will be overlooked Sunday night.

Poor Antonio Banderas likely will suffer the same fate after his deeply felt work in director Pedro Almodovar’s Pain & Glory. As an aging movie director who has begun to slip into the mists of invisibility, Banderas gave what might be the performance of his life. He carried the soul-crushing weight of loss, depression, and delusion for the entire movie. No self-pity. Only honesty.

Sam Mendes, who directed 1917, probably will cap his awards season with another win but does anyone really believe that Mendes is as original or notable a talent as Bong Joon Ho, who directed Parasite, which probably will have to content itself with winning best foreign-language film, a category that should be eliminated.

Yes, I said it. In this global moment, the distinction between English-language and foreign-language films seems particularly useless. Movies are movies. Get over it.

Let’s talk best actress. Renee Zellweger will take home an Oscar for playing Judy Garland in Judy. No problem, but I can’t imagine wanting to revisit that movie again. Do you remember who directed Judy? It was British theater director Rupert Goold, whose only previous feature was True Story. Remember what that was about? Oh hell, look it up.

By the way, I’m not a 1917 detractor, although I wouldn’t rank it among the great World War I movies. For me, few movies ever will surpass Stanley Kubrick’s Paths of Glory or Jean Renoir’s Grand Illusion, but that’s a high bar and if 1917 wins the best picture — which it probably will — I won’t be tempted to renounce the Academy for another bone-headed decision. After last year’s embarrassing best picture award for Green Book, there’s nowhere to go but up.

So am I ambling my way toward predictions? I suppose.

Complain as much as you want but Oscars remain an unavoidable part of cinema culture. They’ve been around longer than most film festivals and have proven more enduring than the work of most critics.

Here are my predictions in major categories. I’m presenting them without annotation as a way of avoiding adding even more blather to the pre-Oscar tumult -- if there really is any.