Another ‘Emma’ reaches the big screen

An aggressively well-appointed version of a Jane Austen novel gets the job done. 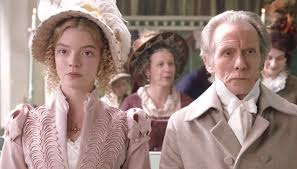 We hardly need an introduction to Emma, the title character of Jane Austen's 1816 novel. The young woman was the subject of a well-received 1996 Douglas McGrath movie starring Gwyneth Paltrow. Even greater numbers of viewers probably are familiar with Amy Heckerling’s Clueless, which starred Alicia Silverstone in a smartly conceived, high-school updating of Austen’s story.

Other Emmas have come and gone and some adventurous souls may even have read Austen’s novel. But Austen never seems to lose her appeal, which may explain why we now get director Autumn de Wilde’s 21st Century addition to the Austen big-screen canon.

For reasons that I couldn’t entirely discern, de Wilde and cinematographer Christopher Blauvelt decided to present the movie in a kind of strange way. Everything about the movie’s settings and costumes seems perfect, yet nothing seems entirely right. It may be pushing the point but it’s as if we’ve landed in a theme park devoted to the novelist’s work. Think Austenworld, where visitors are separated from the exhibits by velvet ropes.

If the approach was meant to heighten the cloistered rigidity of the world Austen observed, it becomes superfluous. Austen was no satirist, but she needed no help in pointing out the pretensions, social limitations, and hypocrisies of her characters.

Thankfully, Austen’s attempts to humble Emma -- making her aware that the world may not revolve around her -- remains. Better yet, the secondary roles are well-cast, from Bill Nighy as Emma’s constantly fretting father to Miranda Hart’s annoyingly loquacious but well-meaning Miss Bates to Mia Goth’s Harriet, a young woman who falls prey to Emma’s thoughtless manipulations.

Early on, Emma dissuades Harriet from marrying Robert Martin (Connor Swindells), a farmer who makes an obviously perfect match for her. Not good enough, says Emma as she sets Harriet up for disappointment.

Such is Emma’s issue; her faith in her own judgment blinds her to the feelings of others.

The key role of Mr. Knightley goes to Johnny Flynn, who brings hunky appeal to the character and who has the distinction of being the only Knightley in the story’s long history to be given a rear-view nude scene.

The key scenes — Miss Bates’ humiliation by Emma, for example — work well and Austen’s idea that love must be earned with expressions of good moral character survives. Besides, it's reassuring to see that, even with limited screen time, the ever-resourceful Nighy refuses to be held prisoner by a costume so constricting it made me uncomfortable just looking at it. (See photo above.)