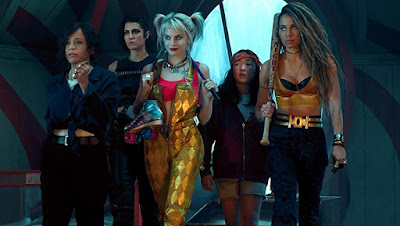 Gotham used to be denominated by Batman and his implacable foes, fiends such as The Joker, The Penguin and The Riddler. If you go to the movies, you know that times have changed.

Joker, to cite one example, has become a full-fledged mental case, the living embodiment of urban loneliness and crushed dreams. Joaquin Phoenix, who's about to win an Oscar for his unnerving portrayal, took the Joker out of the comic-book realm and created a figure as disturbing as the one Michael Rooker created in Henry: Portrait of a Serial Killer.

Now comes Birds of Prey, which tries to put Gotham back in a comic-book box, turning the movie over to Harley Quinn (Margot Robbie), a character who made her big-screen debut in the woeful Suicide Squad. Director Cathy Yan and screenwriter Christina Hudson give Robbie a platform on which to display her version of crazy. Call it a mixture of girl-power and rage.

The set-up: Having just broken up with the Joker, Harley’s emotional pigtails are drooping. She’s also very angry and when Harley gets angry, explosions likely will follow. So will fights in which Harley will display her phenomenal skills. Her brutal capacities play against her little-girl looks. Make that deranged little girl looks.

Fast-moving and devoted to the idea that action can’t be too excessive, Robbie and her cohorts seldom slow the movie’s roll as it romps across Gotham, a city that has given Harley an accent that’s pure New York.

Say, this: No one will accuse Robbie of not having a good time as she fights the movie's principal villain, Ewan McGregoe’s Roman Sionis, a.k.a. Black Mask. As is appropriate for the genre, McGregor does some scenery-chewing -- with relish, of course.

As the movie develops, Harley encounters several women who have the potential to becoming sidekicks. These include a Gotham detective (Rosie Perez), a singer (Jurnee Smollett-Bell) who plies her trade at Roman's night club and goes by the name of Black Canary. A revenge-seeking woman (Mary Elizabeth Winstead) has made the crossbow her weapon of choice. She's The Huntress. Harley also meets a teen-age thief (Ella Jay Basco), an expert pickpocket who’s able to keep pace with Harley in the profanity department.

Not all of the action can be classified as comic-book harmless. Early on, Harley jumps from a stage onto the legs of a seated man. Bones break. Roman's henchman (an effective Chris Messina) inflicts punishment on his boss's enemies by peeling the skin off their faces.

To her credit, Yan gives each of the women personality and independence. Although Robbie produced the movie, she doesn’t hog it. The basic formula finds women overcoming differences to fight a common enemy.

Yan plays with the movie’s structure, manipulating time to allow for the introduction of backstories but generally keeps pedal to the metal. After a while, the glut of action loses some of its excitement and the movie never pretends to explore any thematic depths.

No, the point here is ass-kicking sisterhood with comic flourishes that land with varying degrees of success. Still, it’s not easy to dismiss a movie in which Haley acquires a pet hyena and names the animal Bruce. A reference to the Gotham of tradition as in, say, Bruce Wayne?

Birds of Prey arrives with a subtitle that can’t be said without taking a breath: And the Fantabulous Emancipation of One Harley Quinn. You get the idea. Freed from the Joker's influence, a liberated Harley emerges. But what's with the word "emancipation?" Did Joker free her? If so is that really liberation?

But wait. I'm reading too much into a movie that isn't out to test anyone's interpretive powers.

Birds of Prey doesn't allow for much by way of reflection. At an economical 109-minutes in length, the movie plays a steady game of hurry-up, which may be a good thing because it doesn’t exactly have a lot on its mind. Part costume party, part girl-power explosion and part grunt-and-stunt festival, Birds of Prey passes in a blur.