‘Call of the Wild’ goes digital

It may not be a dog but this adaptation of a Jack London novel stakes out a mediocre claim. 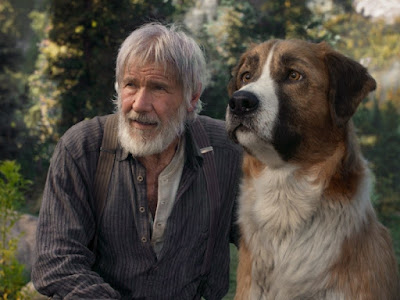 In The Call of the Wild, an adaptation of a classic Jack London story, the heroic dog at the center of the movie has become a digital creation. But it’s not only the dog that doesn’t seem real. The same goes for the Yukon town where the dog — Buck — winds up and for much of the movie’s romanticized sentiment. In Alaska, Buck learns to become a true part of nature, joining forces with wolves and creating a family.

Harrison Ford takes the starring human role; he’s John Thornton, a man who has fled to the Yukon after the death of his young son wrecked his marriage and his life.

But I’m getting ahead of myself. When we first meet Buck, he belongs to a judge in a small California town. Banished to the judge's porch, the unruly Buck is stolen and shipped to Alaska, the wilderness where a gold rush has created a growing need for sled dogs.

Initially, Buck is trained to pull sleds by a mailman played by Omar Sy. Sy's character travels with a woman (Cara Gee), who seems to around so that she can fall through thin ice and be rescued by the always heroic Buck.

Buck becomes a leader among the mail-service dogs but eventually loses his status when the government suspends mail delivery to remote towns that are hundreds of miles apart.

The story goes exactly where you'd expect as Buck and Thornton begin life in the woods, but this version lacks the kind of grit we might expect from a story by London. It feels bloodless.

Heavyweight cinematographer Janusz Kaminski (Schindler's List, Saving Private Ryan, The Post) does justice by the Alaskan scenery and it's no surprise that Ford holds the screen. But even Ford can’t elevate this one from the mediocrity to which its tethered — or should I say leashed.

The dog’s movements reportedly were created in motion-capture by Terry Notary, who's known for his creation of animal movements. He does good work but I seldom forgot that I was looking at a digital creation rather than a living, breathing slobbering animal.

Call of the Wild did make me think about the advantages of digital dogs, though. They don't poop. They don't throw up on the rug. They don't need to be walked. Vet bills are negligible.

Unconvinced? Me too. Both on-screen and off, real dogs are better.