A portrait becomes a gateway to love 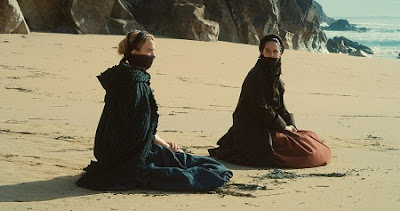 There might be no greater difficulty in portrait painting — particularly in the days before photography — than a subject who refuses to sit, someone who doesn’t want to be pinned to canvas for as long as the painting lasts. Consider that when watching Portrait of a Lady on Fire, a romantic story about a love affair between two women, one a painter, the other the subject of her painting.

Having said that, I think it would be a mistake to look at director Celine Sciamma’s movie as a deep reflection on the painter’s art. Judging by the portraits we see in the movie, the story’s main artist hardly qualifies as an undiscovered master.

So if the movie isn’t about painting, what is it about?

I’d say that it’s about two women, each weighing the potential in the other before committing to a sexual relationship. Because the movie takes place on a remote island where there are no men, Sciamma achieves a kind of pristine isolation. For most of its 121-minute running time, Portrait of a Lady on Fire becomes a laboratory in which two actresses and the director try to see what happens when the currently out-of-vogue male gaze vanishes.

How could it be otherwise? Aside from a few intrusions, the cast consists entirely of women who have been directed by a woman.

The setup: Marianne (Noemie Merlant) has been hired by a French countess (Valeria Golino) to paint a portrait of the countess’ daughter, Heloise (Adele Haenel). An unseen male — an Italian nobleman who is considering marrying Heloise — has requested the portrait. Presumably, he wants to inspect the merchandise before consummating the purchase.

A reluctant Heloise has resisted her mother’s efforts to obtain such a painting, having totally frustrated the previous artist who tried to paint her portrait. To get the job done, Heloise’s mother concocts a ruse. Marianne will pose as a companion hired to take walks with Heloise. During these excursions, Marianne will observe Heloise. She'll then retreat to her room to paint.

At first, this observation must be done slyly. But it’s also clear that Heloise wants to take the measure of her companion. If you look at the movie as a courtship, it becomes clear that these women are feeling each other out. They’re making assessments. Both actresses handle this period of evaluation with exceptional precision.

Sciamma introduces a bit of a story. Marianne arrives on the island in a storm-tossed sea in which her canvases are thrown into the drink. She dives in after the canvases, which are crated in a large wooden box. Left on the beach, she must haul her canvases up a steep hill to the countesses’ home.

As the story unfolds, Sciamma introduces historical context. We’re in a time when it was difficult for women to establish themselves in the male-dominated art world. At one point, Marianne says that women artists have been kept away from the great subjects, a way of trivializing their work.

The fact that Heloise is a character of mystery and opinion becomes the movie’s saving grace. It soon becomes clear that she won’t cooperate with Marianne unless she feels the two are on an equal footing. She's quick to figure out what Marianne is doing and she rejects the painter's first effort as being too restricted by convention. She wants to participate in determining how she will be portrayed.

Marianne eventually follows this lead — and the two wind up on as much equal footing as can exist between an artist and her subject.

All of this takes place in a sparse environment. Sciamma uses little music and emphasizes natural sound, the creak of shoes on exposed wooden floors, for example. Cinematographer Clare Mathon lights the interiors in ways that fit a period when the best light existed before the sun went down.

It takes time for the sexual relationship between Marianne and Heloise to reach the screen. After an initial encounter (not depicted), we see the two of them in bed. Their nudity makes for the least strained scene in the movie. They share an intoxicating substance (presumably marijuana obtained from one of the women on the island). Freed from bodice-heavy clothing, they finally seem unbound by the constraints of their time.

Moments of female solidarity can be found. Sophie (Luana Bajrami) who works as a maid on the estate becomes pregnant. Marianne and Heloise help her to obtain an abortion from one of the women on the island, a strange scene in which both Marianne and Heloise are present and which takes place with Sophie lying on a bed with a toddler, a child of the abortionist or perhaps a child in her care.

Initially, Marianne looks away, but Heloise insists that she not avert her gaze, perhaps a way of showing what it means for a woman to take control of her body. I’m not sure.

Much of the movie unfolds after Golino’s character has left the island, leaving Marianne and Heloise to live in relative freedom. At one point, they join a group of women on the beach who are engaged in a strange ritual that’s mysterious — if a bit cryptic.

Now, I have to confess that all this gazing between Marianne and Heloise can become a bit dull, even repetitive. Moreover, the movie’s mixture of gothic elements, melodrama, and naturalism doesn't always work.

But the movie’s ending has emotional power. When Marianne returns to society, the appearance of men feels almost shocking. She’s back in a world that has little use for her work, although she now has an enriched inner life. Portrait of a Lady On Fire tells the story of a moment in two lives, a big moment.