Summary: What's the world coming to anyway? Samantha Jones put a whoopin' on Indiana Jones this weekend, thus proving...er...who knows what? According to Boxoffice Mojo, a Web site devoted to tracking the numbers, "Sex and the City" slipped $55.7 million into its Louis Vuitton purse, beating "Indiana Jones and the Kingdom of the Crystal Skull," which added only $46 million to its coffers.

This weekend's chick-flick triumph will surprise no one who attended a showing of the movie on Friday. If you did, you would have seen an outpouring of 20something women so large its latte consumption could induce a global coffee drought. Many dressed for the occasion, donning their idea of Carrie Bradshaw-like frocks and turning opening day into a national event, a party for the show's eager legion of fans. 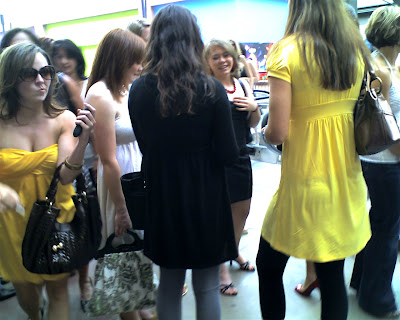 The day prompted questions: When's the last time you saw a woman wearing a cocktail dress at a movie? When precisely did Carrie Bradshaw become a role model? How did all these women get the afternoon off from work?

Turns out "Sex and the City," a big-screen continuation of the popular HBO series, is more than a movie; it's a phenomenon. I left a 2 p.m. Friday showing at a downtown Denver theater only to find a long line of women waiting for the 5:30 p.m. show. They were lining up about an hour ahead of time. The atmosphere outside the theater was giddy and a little strange, as if the world suddenly had sprouted hundreds of Carrie Bradshaw wannabes, women who had joined forces to celebrate a show that had given them six years worth of heated water-cooler conversation. All the evening shows already had been sold out.

The movie? It was like watching a full season of the show compacted into a sometimes numbing two and half hours, a protracted bore that rehashed a question I thought the TV show already had answered: Will Carrie find lasting happiness with Mr. Big (Chris Noth)?

No matter. For all its apparent savvy and ground-breaking sexuality, "Sex and the City" remains a contemporary reworking of a standard fairy tale, a Cinderella story about a writer who hopes to find happiness with a Wall Street prince charming. Of course in this case, the glass slipper is very self-consciously replaced by Manolo Blahnik. 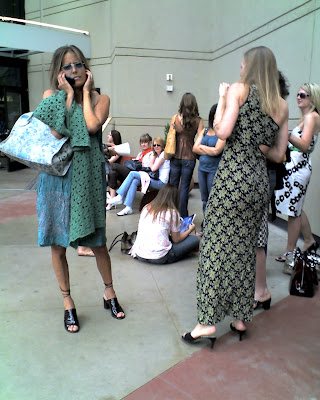 It's not exactly a guy thing, and the guys who attended may have felt a little left out, as if they'd won a date with Sarah Jessica Parker -- the actress who helped turn Carrie into a brand -- but were cropped out of all ensuing pictures. (Photos of the theater crowd courtesy of my wife, Sandra Kaplan; and, no, she didn't like the movie, either.)

I confess: I watched the TV show, but I thought most seasons were better than the movie, which didn't have to be especially good. It just had to be, an excuse for pent-up, Cosmopolitan-fueled love to burst into the marketplace over a warm weekend in late May -- just like that, as Carrie might say.

Whatever it all means, "Sex and the City" did, of course, beat "Indiana Jones" at the box office, leaving us to speculate that the only use the "Sex and the City" crowd might have for Indy's patented bullwhip would be as a present for Samantha. I'm sure she'd figure out something creative to do with it.
Posted by Robert Denerstein at 12:14 PM