Rumbling with the great Genghis Khan 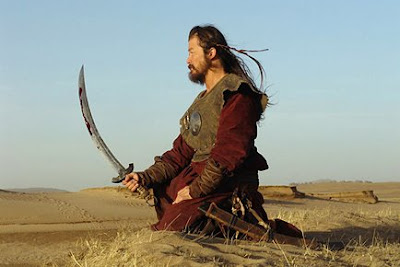 Summary: "Mongol" has the look -- if not the narrative polish -- of a major epic. Flawed, yes, but director Sergei Bodrov's dramatization of the early years of Genghis Khan's life has enough bloody action to keep even those who hate subtitles from slipping into coma.

"Mongol" basically covers Genghis Khan's rise, focusing on early tribulations: the murder of his father by rival clansman, separation from his family and the slow climb to power that led to Mongol unity. Bodrov also gives the Khan -- known as Temudgin and played as an adult by Japanese actor Tadanobu Asano -- a sustained romantic interest. Temudgin falls for and remains devoted to the bride (Khulan Chuluun) he selected when he was a mere boy of nine. The story also deals with the Khan's relationship with his blood brother Jamukha (Amarbold Tuvinbayar), at first a fierce ally and later a reluctant enemy.

Bodrov, who reportedly wants to expand the Genghis Khan story into a trilogy, mixes standard movie ploys with ethnographic filmmaking about Mongol life in the 12th century: The result is a historical saga as it might have been imagined by an anthropologist.

The movie doesn't stint on battles -- some of which allow their digital seams to show -- but it does shortchange dramatic development, occasionally leaping from one event to another without bothering to tell us how the jump was made. Such a schematic approach often hobbles the narrative, which doesn't quite achieve the greatness an epic of this magnitude seems to require.

Still, the broad expanses of the steppes, as well as a sustained sense of exoticism, make for an intriguing enough time at the movies. "Mongol" is a big movie that sprawls across the screen and seldom fails to take us with it.
Posted by Robert Denerstein at 11:14 AM

I thought Tuva's wedding was a powerful and beautifully photographed view of today in Mongolia....