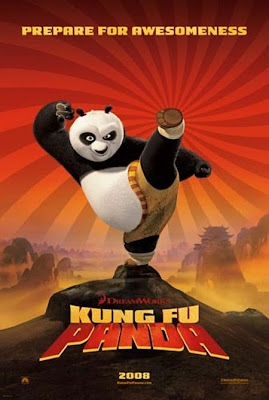 Summary: What is it about little kids and slapstick? The most fun I had at "Kung Fu Panda" involved listening to little ones enjoy themselves as the Panda character -- voiced by Jack Black -- tripped over his own feet or got smacked around by others. Although "Kung Fu Panda" hardly qualifies as a classic slice of animation, it's likely to hit (no pun intended) the spot with youngsters who are susceptible to broad humor -- and, you know what, that's not necessarily a bad thing.

Dreamworks has put together a stellar voice cast to launch its foray into this summer's animation sweepstakes. In addition to Black, you'll hear Dustin Hoffman, as the sagacious Master Shifu, a diminutive creature who's assigned the task of training Black's character, the bumbling Po, a panda whose father expects him to enter the family's noodle business. The movie makes fun of the fact that Po's dad is a goose, but, like much about this movie, silliness trumps sense.

Genetic challenges aside, Po has bigger dreams than those of his father. As a major kung fu fan, he hopes that the can join the ranks of the Furious Five: Tigress (Angelina Jolie); Viper (Lucy Liu); Crane (David Cross); Mantis (Seth Rogen) and Monkey (Jackie Chan).

The plot is just what you'd expect. Po learns that he must fulfill his destiny by becoming the long-awaited Dragon Warrior, a journey that leads to a face-off with the evil Tai Lung (Ian McShane). We know Tai Lung is no good because he speaks in precisely the kind of booming, amplified voice that's required of all animated bad guys, evil in an echo chamber.

Mixing bromides, cartoon antics and nicely drawn backdrops, "Kung Fun Panda" should score with kids who, unlike many of their adult caretakers, probably care more about pratfalls than plot.

Maybe it's all part of the training that kids receive for what's generally known as " later life." At some point, the battering ceases to be cartoonish, taking on more tortuous mental and emotional dimensions. Hopefully, today's little ones -- who by then will have grown -- still will be able to laugh.
Posted by Robert Denerstein at 12:01 AM