I will mess with the Zohan 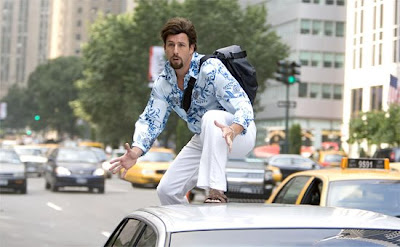 Summary: I didn't get paid to see "You Don't Mess With the Zohan," but I went anyway. Why waste my time? It's a question you might well ask, assuming that you're of sound mind and well past adolescence. I went for two reasons: First, I'm teaching again in the fall, and "Zohan" is the kind of movie my students likely will have seen. Second, I'm on a mission: I'm trying to figure out exactly why Adam Sandler has such a successful movie a career. And, no, after more than 20 movies, I'm still not confident I have the answer.

"Zohan" seems to be getting what I would call "tolerant" reviews from critics, assessments that rank in the two to two-and-a-half star range. Roger Ebert, who awarded the movie three stars, says he found himself enjoying much of it, although not without feeling some shame. Writing in The New York Times, A.O. Scott finds that "a lot of the crude bodily-function jokes are actually pretty funny, not least because they are supplemented by more hummus-based humor than you might have thought possible." (Sandler even brushes his teeth with the stuff.) Claudia Puig, writing in USA TODAY, offers this: "If one-note jokes that drag on too long or are worked into the ground aren't enough to trigger comic nausea, then perhaps the myriad uses of hummus will do the trick in 'You Don't Mess With the Zohan.' The running hummus gags are an illustration of what is both right and wrong with this broad satire, which is sometimes funny, but ultimately disappointing."

OK, you get the idea about critical buzz -- not that it matters when it comes to Sandler, who's able to tap into his audience's loyalty with the directness of an addict finding a vein.

The idea (and, yes, I use the word loosely) behind "Zohan" -- that Palestinians and Israelis can get along if they unite against the real enemy, a capitalist who wants to build a mall in Brooklyn -- might be less sophisticated than any you'll find in "Kung Fu Panda," but the humor is considerably more gross, beginning with a scene in which Sandler -- as the fabled Israeli counterterrorist Zohan -- flips a fish in the air and catches it in his butt crack.

But here's the twist: Zohan is a lion that wants to lie down with the lambs. He's tired of killing, and wants to become (ready for this?) a hairdresser. That's the movie's take on an outrageous conceit, that an Israeli macho man might want to enter a line of work that's stereotypically associated with gay people. To achieve his dream, Zohan fakes his death, and heads for New York, where most of the story unfolds.

Part of Zohan's machismo involves his very large genital package, which protrudes through Sandler's costumes throughout the movie, a softball sized bulge. Can you imagine if the joke were reversed? That would be true daring, a comedy about a man whose equipment screamed out for enlargement. But that's not the Sandler way, so when Zohan lands a hairdressing job -- in a salon owned by a Palestinian woman (Emmanuelle Chriqui)-- he begins servicing the salon's aging clientele. He becomes a stylist and a sex machine for seniors.

Maybe part of Sandler's popularity has to do with the fact that the audience senses he's a good guy. In any case, he's nothing if not loyal, and this time, he renews his working relationship with director Dennis Dugan, who took charge of such Sandler comedies as "I Now Pronounce You Chuck and Larry," "Big Daddy" and "Happy Gilmore." He also makes room for old pal Rob Schneider, who plays a Palestinian cab driver. He also teams with Hollywood hotshot Judd Apatow ("Knocked Up" and "The 40 Year Old Virgin"), who's listed as one of the movie's co-writers and who reportedly made uncredited contributions to the script of "The Wedding Singer."

I've often been put off by Sandler's approach, in which a late-picture show of decency serves as an apology for all the proceeding vulgarity, and I laughed exactly twice during this overly long comedy. The crowd at a preview screening, which laughed more, provided me with at least one heartening thought: Sandler's audience probably qualifies as the ultimate "Sex and the City" antidote, a group that revels in a movie's lack of style and sophistication, greeting each new gross-out as if it were the answer to a prayer.

Which leads me to something I'd pay to see: Zohan burying a pair of Carrie Bradshaw's Manolo Blahniks in a great big mound of hummus. Hey, even I can dream.
Posted by Robert Denerstein at 10:18 AM