"The Sweet Smell of Success" 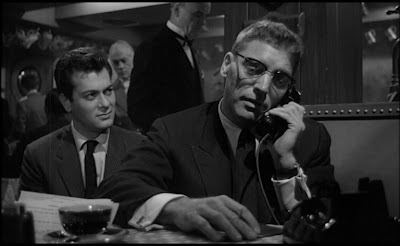 Every now and again, I take another look at British director Alexander McKendrick's "The Sweet Smell of Success." I was reintroduced to the movie in 1986 when McKendrick received a tribute at the Telluride Film Festival, where an immaculate print was shown in the cozy confines of the Sheridan Opera House.

Certain movies become part of one's vocabulary, working their way into one's consciousness with as much force as anything real. An example: I know a PR guy (the current term) who labored as a press agent (a now-outmoded label) in New York during the 1950s. He admires this 1957 McKendrick classic, perhaps because he recognizes harsh truths in the character of Sidney Falco, the grubby, ambitious publicist played by Tony Curtis in one of his finest performances. The mere mention of the name Sidney Falco makes my friend -- who has been around more than a few blocks -- smile. Talk about desperation. Even Falco's voice seemed to sweat.

The main tension in the movie is between Falco and J.J. Hunsecker, a powerful columnist whose favor Falco constantly courts. In the '50s -- the heyday of New York newspapering -- certain columnists wielded power in the manner of Hunsecker, a titan of a man portrayed by Burt Lancaster. Hunsecker was so dominating that even when seated, he seemed taller than anyone in the room. Walter Winchell most often has been mentioned as the inspiration for Hunsecker. British reviewer Peter Bradshaw goes a terrifying step further, calling Hunsecker a combination of Winchell and FBI chief J. Edgar Hoover.

Given the current climate at most newspapers -- jitters about diminishing influence -- a look back at a time when mention in an important column could keep a career humming evokes a kind of twisted nostalgia in those of us who remain newspaper junkies.

So while browsing through Movie City News this morning, I was pleased to find a link to Film in Focus, which offers a revealing piece on the movie from McKendrick's "On Film-Making: An Introduction to the Craft of the Director."

This particular bit describes how playwright Clifford Odets reworked a scene from the original screenplay by Ernie Lehman.

A sample: "It is not easy to explain Clifford's process. It took place mostly in story conferences, daily meetings between three people: Odets, producer Jim Hill and myself. Much of the discussion was lively, aggressive argument in which it seemed that we ripped every scene to shreds to the point where I was growing increasingly nervous that nothing would be left."

Something was left, of course: a great helping of film noir from a Brit who captured something essential about Manhattan in the 1950s.
Posted by Robert Denerstein at 9:35 AM