An Israeli movie that eschews politics 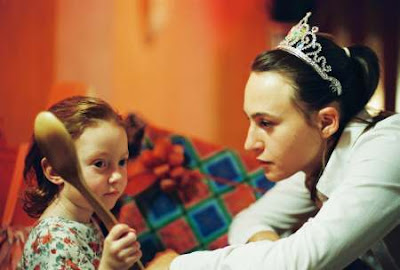 Summary: Finally, an Israeli movie that isn't preoccupied with tensions in the Middle East. In "Jellyfish," directors Etgar Keret and Shira Geffen present a small, emotionally elusive movie that follows its characters through a variety of life-altering situations. Keret and Geffen are to be congratulated for not allowing the movie's more fanciful elements to undermine its quiet intelligence.

It's telling that Keret and Geffen, who are married, have said that they view their movie -- developed by Geffen from one of her short stories -- more in terms of poetry than plot. (Read an interview with them in "Filmmaker.")

Here's a quote from that interview in which Keret explains why the couple initially had difficulty finding a director for Geffen's script: "Traditionally, Israeli films are hyper-realistic, they almost always deal with an important issue, which could be the Israeli-Palestinian conflict, the memory of the Holocaust, the kibbutz and its success or failure. This is the way that you make a film in Israel, and anything that is metaphorical [is not understood]," said Keret.

"Jellyfish," which demands to be taken metaphorically, revolves around three stories: A bride and her new husband (Noa Knoller and Gera Sandler) are forced to alter their honeymoon plans when she breaks her leg at the wedding reception. Instead of lolling on a gorgeous Jamaican beach, they're stuck at a two-star Tel Aviv hotel. In another of the movie's stories, a waitress (Sarah Adler) loses her job and finds herself in charge of a mysterious girl who emerges from the ocean. Additionally, a Filipina immigrant (Ma-nenita De Latorre) takes care of a disagreeable elderly woman and dreams of rejoining her young son at home.

"Jellyfish" is the kind of small movie that catches you unaware. At first, I thought it might be a trifle precious, a movie steeped in the doldrums of arty passivity, but I got caught up in its odd rhythms, and began to see that Keret and Geffen -- whose film won the Camera d'Or at the 2007 Cannes Film Festival -- were interested in running their fingers across the texture of lives that seem disassociated from the ordinary stream of things.

For the record, Keret's novella, "Kneller's Happy Campers," became the basis for director Goran Dukic's "Wristcutters: A Love Story," which was released in 2006. "Jellyfish" is, I think, a better and more deeply felt film.
Posted by Robert Denerstein at 12:00 PM