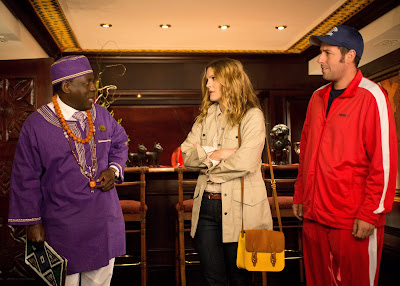 In Blended, Adam Sandler manages to turn South Africa into a theme park full of animals, happy black South Africans and lots of adults who are trying to solidify relationships in newly formed families.

I've pretty much given up on Sandler's movies. For reasons that remain unknown to me, Sandler has a large enough following to keep him working. That makes it necessary to check in on him now and again.

Despite the fact that Blended marks the third collaboration between Drew Barrymore and Adam Sandler, this duo has yet to enter the pantheon of great screen couples. It's unlikely -- at least I hope it is -- that clips from either the Wedding Singer or 50 First Dates will show up the next time someone decides to assemble a reel's worth of great screen couples.

In Blended, Sandler plays Jim, a widower with three daughters. Barrymore plays Lauren, a divorced woman who has two sons.

The movie opens with Jim and Lauren on a mismatched blind date at a Hooters (advertising). As a result of a tortured plot contrivance, they and their kids eventually are thrown together at the same South African resort. They're even forced to share a single suite.

Jim, who works for Dick's Sporting Goods (more advertising), is at a bit of a loss when it comes to raising daughters. He encourages his 15-year-old (Bella Thorn) to bulk up for varsity basketball. Jim is so sports-oriented that he named one of his daughters Espn, as in ESPN, which struck me less as a joke than a form of child abuse.

Lauren, who earns her living organizing closets, has difficulties with her hormone-driven older son (Braxton Beckham) and a tantrum-prone younger son (Kyle Red Silverstein) who can't hit a baseball.

Hmm. Maybe, just maybe, Jim and Lauren can get over their animosities, fall in love and help each other improve as parents. You think?

Anyway, the movie involves looking at animals, Lion King-style music, ostrich wrangling, and other bits like the one in which Shaquille O'Neal, as one of Jim's co-workers, jiggles his stomach muscles.

The humor, described in a Variety article as an attempt to go for "big physical laughs," is all pretty much covered in the movie's trailer.
Speaking of jiggles, Jessica Lowe plays the bust-shaking younger wife of a libidinous older husband (Kevin Nealon).

Blended isn't quite as painful as some the worst Sandler movies (Grown Ups or Big Daddy), and, at times, it tries to be sensitive about real parenting issues. If only it had tried to be a little bit sensitive about where its story is located. Here are two parents with an opportunity to teach their kids something about the world they're likely to inherit, and all they bequeath them are cheap laughs.