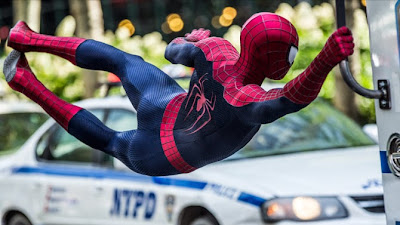 Comic-book movies consist mostly of a cascading series of episodes held together by the presence of a familiar superhero.

In the case of The Amazing Spider-Man 2, our superhero is a conflicted young man torn by fears that his crime-fighting destiny will wind up hurting the young woman he loves.

If you want to play ranking games with all the Spider-Man movies -- including those in director Sam Raimi's first iteration -- go ahead. Me? I'll just say that The Amazing Spider-Man 2 delivers enough of the comic-book goods to satisfy fans.

He also adds a couple of major villains to keep Spider-Man busy and to flood the screen with the requisite action.

Spider-Man -- a.k.a. Peter Parker -- must take on the new head of the pernicious Oscorp, a childhood pal named Harry Osborn (Dane DeHaan). Harry inherits the company when his father -- a man suffering from a disease that seems to be consuming him with rot -- dies.

A nerd who works at Oscorp quickly poses another threat. As the story unfolds, Jamie Foxx's Max transforms into Electro, a fiend who wants to suck all the power out of New York City. Electro is born when Max falls into a tank of electric eels.

Electrified and angry, an embittered Max stumbles into a major set-piece in Manhattan's Times Square.

No faulting Foxx, but there's only so much mileage that can be gained from watching bolts of electricity shoot from Electro's fingertips, a retro form of villainy.

As DeHaan grows into his villainous role, he gradually (and appropriately) loses our sympathy; he's better in the film's quieter moments and not quite up to the roaring fits of menace the script eventually demands.

The action is best when Spider-Man is swinging through Manhattan's streets. Much of the rest of the dash-and crash sequences have a take-it-or-leave-it feel with Webb doing his best to add emotional heft to the proceedings.

Some of this emotion derives from the conflicted relationship between Peter and Stone's Gwen Stacy, as well as from Sally Field's heartfelt performance as Parker's Aunt May.

May, now a widow, has cared for Peter since his father and mother (Campbell Scott and Embeth Davidtz) were forced to flee New York, a bit of action shown in the film's bracingly brisk prologue.

Webb tries to give the movie's early sections a comic tone, but can't seem to decide how far to carry it as he moves toward a typically prolonged finale. About three-quarters of the way through its two hour and 22 minutes, the film begins to show signs of wear, and the need to dispatch with two villains adds a bit of anti-climactic bloat.

But Webb makes a couple of bold choices (one of which surely will prompt debate), Garfield isn't afraid to show a little confusion and all of Stone's scenes tend to sparkle. If Spider-Man 2 isn't a total triumph, it's entertaining enough to hold its own.