'Chef' cooks up a good time 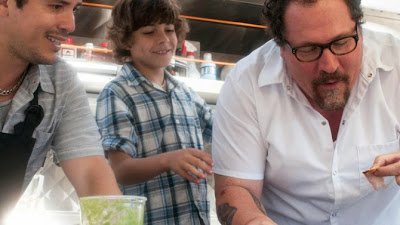 In his new movie Chef, Jon Favreau plays a Los Angeles chef who's creatively stifled. Favreau's Carl Casper runs the kitchen at a successful restaurant, but no longer finds the menu challenging.

When Carl learns that a prominent food critic plans a visit, he decides it's time to show off the innovative skills that established his reputation when he worked in Miami.

Unfortunately the restaurant's owner (Dustin Hoffman) wants to stick to tried-and-true fare, giving customers what they seem to want.

It's not surprising that the city's most important reviewer (Oliver Platt) condemns Carl for having squandered his creative mojo.

Favreau also tosses Carl's personal information into the movie's frying pan. Carl's ex-wife (Sofia Vergara) might be the most supportive former wife ever: She's always trying to help him. Carl also has a young son (Emjay Anthony) with whom he spends insufficient time.

After losing his job and humiliating himself in a public confrontation with the antagonistic critic, Casper decides to return to Miami and ask a favor from his ex-wife's condescending first husband (Robert Downey Jr.)

Downey's character gives Carl a dilapidated food truck. Carl decides to spruce it up, and sell Cuban sandwiches. This back-to-basics move is designed to accomplish two things: It will revive Carl's foundering career and re-establish his relationship with his son.

The boy accompanies Carl and one of his former employees (John Leguizamo) on the cross-country trip back to Los Angeles. Food movie suddenly becomes road movie.

Chef is one of those movies that should be avoided if you're hungry. Cinematographer Kramer Morgenthau makes sure that the movie's food looks scrumptious and, when appropriate sumptuous.

Favreau, who directs and who also wrote the screenplay, tempers an obvious feel-good spirit by keeping Carl from becoming entirely likable. He's a malcontent who doesn't know how to be happy, despite the fact that he receives encouragement from co-workers (Scarlett Johansson and Bobby Cannavale in small roles). He's a mass of irritations.

To achieve happiness, Carl must learn to balance his career and personal life. He must discover how to turn his life into a kind of on-going party with great food, an objective that's bolstered by the movie's soundtrack which has been seasoned with sounds from Cuba and New Orleans -- with dashes of R&B added for good measure.

Once the movie hits the road, it tends to drag a little, substituting travelogue and color for story momentum. Before the movie hit the three-quarter mark of its 115-minute length, I was ready for a bit of short-order editing.

Favreau came to prominence with the indie movie Swingers (1999), which he wrote and in which he acted. Because he also has directed big commercial movies such as Cowboys & Aliens, Iron Man, Iron Man 2 and Elf, he's received lots of praise for returning to his roots with a smaller, more intimate movie.

I'm not sure that big and small are the right measures of a director's success. I'd prefer to consider what we might call "the good-time" factor. By that measure, it's hard to fault Favreau's Chef. Bon appetit.