The adventures of an unlikely gigolo 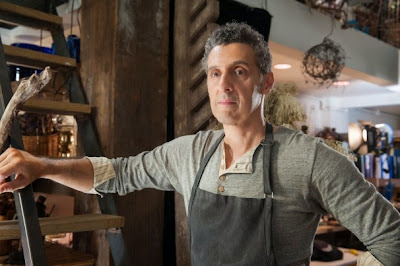 John Turturro wrote and directed Fading Gigolo, a comedy built around the notion that attractive women would pay an obscure florist, played by Turturro, to have sex with them.

The movie's sexual antics, which take place with women played by Sharon Stone and Sofia Vergara, are supplemented by a more appealing strain of comedy.

Toward the end of the movie, Woody Allen -- who plays Turturro's pimp Murray -- is dragged before a court of Brooklyn-based Hasidic rabbis who charge him with corrupting the morals of a beautiful, gap-toothed widow (Vanessa Paradis).

Murray's troubles start when he convinces Paradis's Avigal, who's also a member of the Hasidic community, to visit Turturro's Fioravante.

In a series of tender massage scenes, Fioravante awakens the widow's dormant senses. Avigal begins to overcome her grief and isolation.

The odd relationship between Fioravante and Avigal displeases Dovi (Liev Schreiber). He's the leader of a Hasidic neighborhood crime patrol, and he wants to marry Avigal, who seems to have had a half dozen or so children.

Although Fading Gigolo qualifies as a bona fide mess, it contains moments that suggest how close Tuturro came to finding a tone that perfectly reflects the hodgepodge quality of contemporary life.

Perhaps to emphasize the notion of blurring ethnic boundaries, Allen's Murray lives with a black woman (Tonya Pinkins) who has four sons, a relationship that seems almost incidental to anything else in the film.

I say all of this as a way of expressing fondness for a movie that I can't defend as a success.

Turturro's Fioravante is a quiet, almost stoic man, perhaps the wrong main character in a film that (in my view) needed to surrender to its wackiness, to thoroughly embrace the comic humanity of a moment when so many lines are being erased and so many new lines have yet to be drawn.