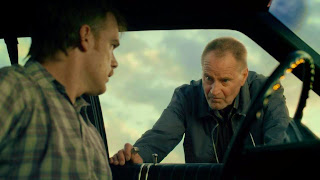 For a while, I thought Cold in July was going to be a thriller with something more on its mind than pouring a heaping mound of pulp over an oft-visited thriller landscape. Michael C. Hall plays Richard Dane, a Texas father who shoots an intruder (Dane's trigger finger slips) during a middle-of-the-night burglary. Dane is torn by feelings of guilt and fear, particularly when a man claiming to be the father of the dead intruder (Sam Shepard) shows up seeking revenge. Director Jim Mickle, who co-wrote the screenplay with Nick Damici from a novel by Joe R. Landsdale, puts lots of intriguing elements in play, but increasingly tilts the movie toward outrageous plotting, Texas color (a la the Coen Brothers) and a disconcertingly violent conclusion. Still, the movie features fine acting -- not only from Hall and Shepard, but from Don Johnson who shows up as a quirky private detective who also runs a pig farm. Vinessa Shaw has a nice small turn as Dane's wife, Ann. There's plenty tjim m admire here, but an over-the-top shoot-em-up finale offers the easiest (and least rewarding) sort of satisfaction.