A monster movie that provides the right kick. 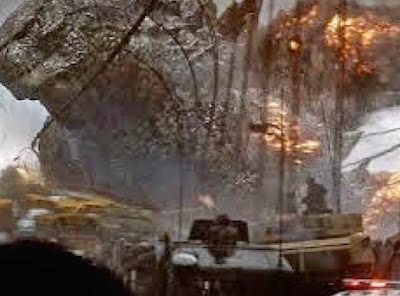 The new Godzilla -- though far superior to Roland Emmerich's 1998 edition -- offers plenty of room for criticism and carping.

Let's get that out of the way first.

-- As an engineer working in a Japanese nuclear plant, Bryan Cranston seems so agitated you half wonder whether his character has been doing some of Walter White's meth.

-- Juliette Binoche is in the movie, but doesn't make it much past the first reel.

-- The movie's human hero (Aaron Taylor-Johnson) seems so generic, he might have wandered in from the set of another action movie.

-- Wisdom? Only if you think the 1954 original can help you unlock the key to successful living. The biggest lesson you can take from Godzilla is an admonition: Don't get crushed.

Problems, yes, but damned if Godzilla isn't full of monumental fun, a major helping of B-movie entertainment that's presented with so much seriousness, it can't possibly be taken seriously.

Credit director Gareth Edwards with understanding B-movie tropes, as well as with a willingness to trash several American cities in a movie that builds (or rather stomps) toward a climactic battle in which Godzilla takes on two hideous-looking creatures known as Massive Unidentified Terrestrial Organisms -- MUTOs for short.

Think of them as skyscraper-sized bugs.

Sure Godzilla could be more careful about where he puts his feet down, but we feel more empathy for the Big Guy than for most of the humans in the film. And let's face it, some of the people are simply there to be squashed, human sacrifices en route to what's bound to be a box office epiphany.

Fifteen years later, Joe -- fueled by grief and obsession -- still lives in Japan. He believes a massive coverup is concealing the true cause of the nuclear meltdown.

Brody's grown son (Taylor-Johnson) -- now a Naval officer -- leaves his wife (Elizabeth Olsen) and young son to travel to Japan. He hopes to help his "nut-case" father who has been arrested for entering the quarantine zone that was ravaged when the nuclear plant blew.

Young Brody soon learns that his father is right in his suspicions.

Edwards (Monsters) doesn't so much tell a story as he hammers together bits of narrative, but he hammers loudly and with resolve, creating a suspenseful atmosphere until he unleashes the wanton destruction that gives the movie its real kick.

Two schools of thought emerge about how to deal with the rampaging monsters. David Straithairn plays an admiral who thinks that the solution may involve luring the creatures out to sea and going nuclear on them.

Ken Watanabe plays a scientist who opposes the military solution. He seems to have a strange concern for Godzilla.

Noisy, senseless and fun, Godzilla saves most of its gargantuan thrills for its finale.

A special nod to Alexander Desplat, whose score ripples through the proceedings like an eerie warning of terrors to come, sometimes sugesting more than the movie's able to deliver.

Not surprisingly, Edwards leaves the door open for a sequel, but he seems to know what's essential about the 60-year-old franchise. He works with enough brio to satisfy genre fans while underplaying grand thematic pronouncements about humanity's fatal arrogance.