When the neighbors are frat boys

A gross-out comedy that parties hard. 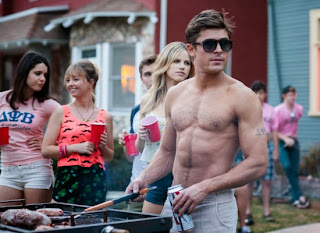 Neighbors -- which contrasts a dissolute-looking Rogen with a super-trim Zac Efron -- may create an early summer stir at the box office.

Why? The movie bristles with the kind of vulgar energies that mark most of today's successful comedies. Neighbors is full of opportunities for gross-out jokes -- and doesn't pass on many of them.

The high-concept gist: A party-hardy fraternity moves next door to a young couple that's adjusting to taking care of their first child, a baby daughter.

At first, the new parents (Rogen and Rose Byrne) try to cozy up to their raucous neighbors, who are being led by Efron's Teddy, the frat's chief party boy.

Husband and wife share in the drug-fueled debauchery, awkwardly trying to present themselves as peers -- albeit peers with responsibilities.

When that tactic fails to produce the desired quiet, Rogen and Byrne declare war on the rowdy neighbors, employing subterfuge and other means to close the frat house.

The purported battle between adults and hormonally active young men is a bit of sham. Neighbors seems like the kind of comedy that would become a DVD staple at Delta Psi Beta, the movie's fictional fraternity.

To me, Rogen's performance seems barely distinguishable from everything else he's done. Byrne -- whose Australian accent seems to come and go -- displays no qualms about leaping into the profane fray. Efron -- often sans shirt -- tries to mix comedy and hunk appeal as the movie's Peter Pan figure, another guy who refuses to grow up.

A subplot pits Efron's character against one of his fraternity brothers (Dave Franco), a young man who begins to understand that the fraternity's concerns (who invented the game of beer pong, for example) aren't exactly on a par with working to limit the effects of climate change.

Personally, I wouldn't want to live next door to any character in a movie that parades its crude humor across the screen while making what feel like random attempts to play grown-up.

Oh well, I suppose something is accomplished here: Neighbors makes the strongest case for restrictive zoning ever put on film.