A heartbreaking ode to childhood 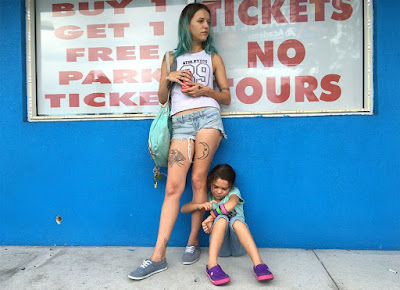 I can't think of a movie that better captures the evanescent joy and freedom of childhood than The Florida Project, a movie set in a run-down motel in Orland, Fla., the kind of place where residents always are one small step away from homelessness. Joy and freedom, yes, but no matter how much fun these kids have, we know they're hanging on by a thread.

Not coincidentally, the movie takes place near Disney World, an attraction dedicated to an entirely different view of childhood and family than the one the movie so keenly observes. Also not coincidentally -- but definitely ironically -- the motel in which much of the story takes place is called The Magic Castle. Nothing about The Magic Castle, a dump coated with purple paint, seems either magical or noble.

If you're interested in knowing how certain effects in movies are achieved, a bit of on-line research usually can lead you to answers. But I don't know if it's possible to explain how director Sean Baker (Tangerine) obtained the performances that make The Florida Project so convincing and special, particularly from the kids who populate his movie.

Six-year-old Moonee, rendered in an irrepressibly energetic performance by Brooklynn Prince, provides the movie with its centerpiece. Moonee seems to be enjoying a summer away from school with two friends: Scooty (Christopher Rivera) and Jancey (Valeria Cotto). Cotta's Jancey lives with her grandmother in the nearby and equally bereft Futureland Inn.

These are not kids who are sent to summer camps, chauffeured from one enriching activity to another or otherwise sheltered from the harsh realities of a junk-food life in a place where most of the residents have little chance for brighter futures.

It's not surprising that at one point, the kids badly damage an abandoned property or that each of them becomes vulnerable to dangers that Baker doesn't always follow to the most harrowing extremes. What would be the point? Things are bad enough for these kids without piling on.

Moonee lives with her mother (a terrific Bria Vinaite), a young woman who tries to cobble together a life. Vinaite's Halley perpetually runs out of money and we fear that she'll never get a grip on how to be a responsible adult, much less a mother. But -- and here's where the movie shines -- it's equally clear that no matter how unprepared for motherhood Halley is at 22, she loves Moonee. She can be a playmate and a friend to her daughter, but she can't be the adult in the room, probably because in one way or another her early life mirrored Moonee's.

A world-weary custodian named Bobby (an excellent Willem Dafoe) presides over the motel. Bobby collects rent, enforces rules and tries to maintain a semblance of order. Dafoe portrays a sympathetic man who has seen almost every manner of hardship befall the denizens of this shabby world, often more than once. When he tries to help, he knows that he's bucking a tide of bad luck and despair.

The achievement of cinematographer Alexis Zabe must be acknowledged; his images can be lustrous and beautiful without shortchanging the seedy environment in which Moonee and Halley spend their time, occasionally trying to get a taste of the good life. When Moonee has a chance her to eat a real meal, her face practically erupts with delight.

Sometimes, there's less need to rattle on about exceptional movies than when we deal those that are mediocre. That may be the case with The Florida Project, a movie that concludes with a scene catapults Moonee into a world of promise and fantasy.

I won't say anything more about the movie's final shot, but everything that precedes it tells us that Baker knows better. Rude awakenings loom in Moonee's world of dreams. And that's what accounts for the sadness beneath every moment of euphoria in The Florida Project: Fantasies may buoy our spirits, but they also can curdle into the most devastating of lies.