Not a bio-pic, Marshall concentrates on a single, racially charged case. 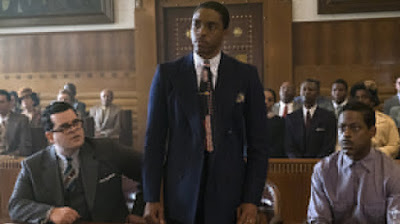 Chadwick Boseman has made a specialty out of playing historical figures. He began with Jackie Robinson in 42 (2013), followed with James Brown in Get On Up (2014), and now tries his hand at Thurgood Marshall in Marshall.

A cautionary note: Marshall isn't really a bio-pic about the man who became the country's first African-American Supreme Court Justice. Rather than taking a sweeping look at Marshall's amazing life and career, the movie focuses on a single case that took place in the early 1940s when Marshall worked as the NAACP's only lawyer.

Law books in tow, Marshall traveled the country defending African Americans whom the NAACP believed to be innocent, men who were on trial only because of their race.

Directed by Reginald Hudlin and written by civil rights attorney Michael Koskoff with his son Jacob, Marshall deals with a racially tainted judicial system -- not in the Jim Crow South but in Bridgeport, Conn.

The case in point involves sex. An African-American limo driver (Sterling K. Brown) is accused of having raped and attempted to murder his employer's socialite wife (Kate Hudson).

As an out-of-town lawyer dispatched by the NAACP, Marshall needs a local attorney to act as the "official" counsel for the defendant. Enter Josh Gad as Sam Friedman, an insurance lawyer who's suddenly thrust into the limelight in a case for which he's ill-prepared.

The trial judge (James Cromwell) rules that only Friedman can speak during the trail. The 33-year-old Marshall acts as Friedman's coach and strategist, often scrawling notes as he sits next to the silent defendant. Friedman never before has argued a criminal case.

Hudlin relies heavily on the evolving relationship between Marshall and Friedman to supplement the judicial proceedings. Self-assured, brilliant and even a bit arrogant, Marshall always seems to know exactly what he's doing as he represents those accused of crimes, knowing that every move he makes also subjects the NAACP to possible scorn.

Friedman slowly comes to share Marshall's convictions, initially fearing that association with a racially explosive case -- which he's more or less dragged into -- will ruin his business and tarnish his reputation.

The movie eventually takes the familiar form of a courtroom drama, which Hudlin handles in a straightforward fashion that would be right at home on a TV series; he interrupts the proceedings with recreations of the accounts of those who offer key testimony, notably Hudson's Mrs. Strubing and Brown's Joseph Spell, two people with widely divergent versions of what really happened.

Hudlin seasons the movie with snippets from Marshall's non-courtroom life. He travels so much that he spends only limited amounts of time his wife (Keesha Sharp). The couple desperately wants to have a child. In what amounts to dramatic name dropping, Marshall meets with poet Langston Hughes (Jussie Smollett) and novelist Zora Neale Hurston (Rozonda "Chili" Thomas) in a Harlem night club.

Boseman, who'll next star in the Marvel Comics adventure Black Panther, brings steady conviction and sly humor to the role of Marshall. Although his character functions as the lead attorney for the defendant, Gad mostly defers to Boseman. Gad plays a middle-class Jew who slowly sees the civil rights light.

The writers may have felt that the case -- which involves race relations and sex -- would be entirely compelling, but Marshall sometimes seems bound by period-piece trappings and routine genre tropes that make the movie feel less exceptional than its title character might lead you to expect.

Still, Marshall's story -- even part of it -- remains a worthy subject: The influence of race on American criminal justice remains a hot-button issue and Marshall understands that the way some cases unfold has more to do with white perceptions, particularly about black men having sex with white women, than with facts, a condition that's still very much a part of our national tragedy.