A straightforward look at the difficulties of returning home from war. 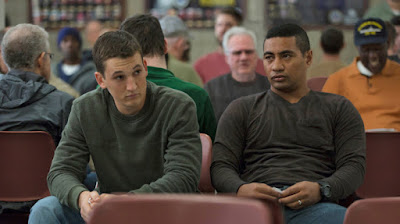 The problems depicted in Thank You For Your Service should be familiar to anyone who has followed news coverage about the plight of veterans returning from Iraq: high suicide rates, an over-taxed VA, crippling cases of PTSD, limited job prospects and other issues related to re-entering civilian life. I've read that the percentage of soldiers who incur psychological damage after deployment in contemporary war zones ranges from 20 to 30 percent.

The actors are playing lower-middle-class guys whose lives have been radically altered by the intensity of their war-time experiences. Tiller's Adam has difficulty re-connecting with his wife (Haley Bennett) and two kids. Cole's Joe arrives home to discover that his fiancee has abandoned him, leaving him in a state of disconsolate confusion. Kaole's Tausolo Aieti -- a.k.a. "Solo" -- suffers from memory loss and sudden eruptions of violence that ultimately affect his relationship with his wife (Keisha Castle-Hughes).

Emotionally disturbed and mentally addled, Solo becomes involved with an older veteran (Omar J. Dorsey), a drug dealer whose efforts to exploit Solo pull the movie off track, but who also adds another generation of disaffection to the story.

Although these men are combat-tested, they're not too proud to ask for help from a VA that is often too burdened to provide it. The movie, which pretty much skirts political issues, doesn't rail against the VA: The folks who work for the VA are simply overwhelmed by numbers.

A combat incident that saddles Teller's character with guilt weaves through the movie; it's seen in flashback toward the end when Adam meets with the widow (Amy Schumer) of a soldier whose death has become a principal source of Adam's guilt. Equally moving is a scene in which Adam travels from Kansas to Arkansas to meet with Emory (Scott Haze), a debilitated soldier for whom Adam also feels responsible.

Playing a take-charge sergeant, Teller gives the movie's main performance, but he strips his work of any trace of show-boating, something that's true for the entire cast.

Based on a 2013 book by David Finkel, Thank You For Your Service stands as an illustrative example of the kind of fighting that begins once soldiers return home from war: Too often, the battle they wind up waging is with themselves.