Loving Vincent can't find a story equal to the artist who inspired the movie. 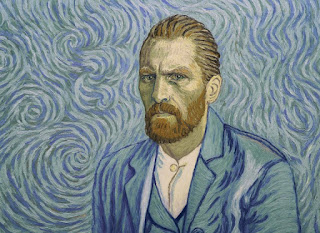 It's easy to see why festivals gobbled up Loving Vincent, an animated work that tells the story of artist Vincent van Gogh in the style of the master's paintings. Tactile and throbbing with energy, the movie's images seem intended to allow viewers to take a vicarious journey inside van Gogh's world.

The story of how the movie was made is impressive. Directors Dorota Kobiela and Hugh Welchman hired 125 painters to take us into the surroundings of van Gogh's later years, if someone who died at the age of 37 can be said to have had later years. To obtain the motion that animates the story, some 64,450 oil paintings were created.

The directors first filmed live actors, using that footage as source material for the movie's many painters. I've read that every second of film required 12 hand-painted frames to bring us into the cafes and rooms van Gogh made famous.

Nothing if not ambitious, Loving Vincent uses actors to give voice to characters familiar to those who've seen van Gogh's work -- and who hasn't? Among the van Gogh subjects who have made it into the movie: postman Joseph Roulin (Chris O'Dowd), Doctor Gachet and his daughter Marguerite (Jerome Flynn and Saorise Ronan). Van Gogh, who appears sporadically, is voiced by Robert Gulaczyk.

Clearly a labor-intensive affair, making Loving Vincent required big-time dedication and the movie easily could have resulted in folly. Loving Vincent is no disaster, but it's not quite the triumph that its subject deserves.

Many reasons: To begin with, the movie's painting proves inconsistent, perhaps an inevitable result of using hundreds of artists.

That, however, wouldn't have mattered had the story lived up to the stature of the artist. Kobiela and Welchman try to wrap the story in mystery. After van Gogh's death, Armand Roulin (Douglas Booth) is dispatched from Arles by his postman father to deliver a letter Vincent wrote to his brother Theo in Paris, but never mailed.

As the story unfolds, the initially skeptical Armand becomes increasingly sympathetic to van Gogh; in particular, he wants to know more about van Gogh's death.

Questions about whether van Gogh killed himself or was murdered don't do enough to add intrigue to a movie that covers mostly familiar ground about one of the world's most recognizable artists.

As various characters recall their dealings with the artist, the movie switches to black-and-white renderings of episodes from the painter's life, some of which look more photographic than painted.

In sum, Loving Vincent might be deemed a noble failure that some will wish to see me merely because of love for van Gogh or because the endeavor certainly qualifies as daring. But it's equally true that little in Loving Vincent proves as illuminating as van Gogh's work itself.

Besides, isn't adding motion to van Gogh's painting a prime example of gilding the lily. Van Gogh's work already reflects a reeling, explosive sense of energy that hardly needed a booster shot from the movies.

I agree completely. I wanted to love it, but the writing made me cringe. Why not have more poetic voiceover to compliment the intriguing vidual imagery?