Struggling to survive -- the movie, that is

Idris Elba and Kate Winslet are stranded in the mountains. In this case brrr is bad. 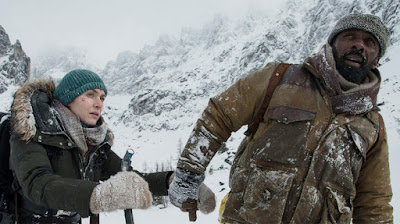 I've been searching what's left of my movie-saturated brain trying to find something (anything, really) positive to say about The Mountain Between Us, a survival adventure starring Kate Winslet and Idris Elba and directed by Hany Abu-Assad, the Dutch/Palestinian director who gave us two Oscar-nominated works, Paradise Now and Omar.

It's not an easy task, but I came up with two things, and I'll share them before I proceed to tell you that The Mountain Between Us qualifies as a major disappointment, a movie that shatters credibility before shifting gears and making an ill-advised turn from formulaic adventure to formulaic romance.

So about those positives: To begin with, it's a pleasure to see the gifted Elba in a lead role as an accomplished man, in this case, a neurosurgeon who's trying to get to reach a patient in need of his skills.

Another positive? Fair to say that Abu-Assad does a decent job with the plane crash that strands the movie's two principals near the film's beginning.

OK, I'm out of positives. Now for the negative side of the ledger:

Winslet plays Alex Martin, a photographer with war-time experience. When the movie opens, Alex is trying to reach Denver for her wedding, scheduled to take place the next day. She's frustrated when she learns that all flights have been canceled because of bad weather. She notices that another passenger -- Elba's Ben Bass -- faces the same problem and proposes that they join forces, hire a private plane and remain on schedule.

Having described the movie as a survivalist adventure, you already know that the plane goes down in the forbidding mountains of northern Utah. This, after the pilot (Beau Bridges) has a stroke while flying, never a good.

If you're going to get into this wilderness ordeal, you'll have to forgive some inconsistencies. At one point, Ben suddenly turns up with a nice pair of hiking boots. A small matter, but you can search for others on your own.

Initially, Ben and Alex argue about the best course of action. He's prone to logical thinking: She's more willing to follow her instincts. Should they stay with the plane or try to walk to safety, a difficult proposition because Alex's leg is broken and neither of them has a clue where they are or how far they might have to travel in to reach a point of survival?

Neither Winslet nor Elba need any selling when it comes to acting ability, but they're not well served by inane dialogue, an obviously stated moral (stronger together) and a late picture, eye-rolling conversion to romance that throws us into a whole other genre.

Adapting a novel by Charles Martin, screenwriters J. Mills Goodloe and Chris Weitz move through plot points like a hiker negotiating deep drifts without the benefit of snowshoes. As is the case with many movies, this one may have begun as someone's labor of love; it turned out to be ... well ... just laborious.