The incredible story of 'Wonder Woman'

A movie that tells the surprising story of how a comic book superhero was born. 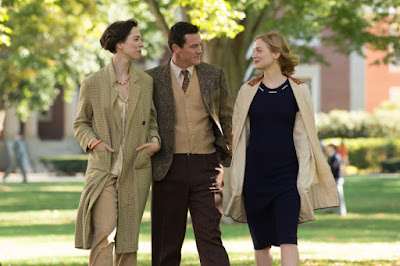 In its early days, the comic-book version of Wonder Woman included homoerotic imagery, ample amounts of bondage, and other quasi-erotic suggestions that were later purged from the adventures of the world's most famous female superhero.

I confess to knowing little about Wonder Woman's origins, so I was doubly intrigued by Professor Marston & the Wonder Women, the story of how the Wonder Woman character originated in 1941. If you want to be totally surprised by the answer, stop reading now, but I'm confident you'll be interested to learn the odd path that brought this now-familiar character to realization.

The movie also becomes an ode to the early days of contemporary feminism, but even at its most didactic, Professor Marston remains an intriguing look at the offbeat story behind Wonder Woman.

Early on, we meet Dr. Marston (Luke Evans), a respected psychologist. When the movie opens, Marston and his psychologist wife Elizabeth (Rebecca Hall) are trying to invent a lie detector. The year: 1928.

Hall's Elizabeth rails against a system that marginalizes her work as a psychologist because she's a woman. Obviously brilliant, the rueful Elizabeth hates being ignored by a male-dominated academic establishment.

The emotional complexity of the story begins to take shape when Marston, who teaches at Radcliffe College, enlists the help of a promising and attractive undergraduate (Bella Heathcote). At the time, Radcliffe functioned as the women's arm of the then all-male Harvard University.

In a startlingly frank exchange, Elizabeth tells Heathcote's Olive that she should stay out of bed (not the words she uses) with her husband. But eventually, it becomes clear that Olive's crush is not for the charismatic professor, who is attracted to Olive, but for Elizabeth.

And then things get even more complicated. Olive must acknowledge that she has sexual and love interests in both Marston and his wife, a situation that eventually leads to the formation of a bounds-breaking family.

Both Evans and Hall acquit themselves well, but Heathcote gives the most surprising performance. She takes Olive from a somewhat innocent student to a full and often eager participant in the socio-sexual experiment that, at least in Dr. Marston's view, constitutes a brave attempt to liberate women and teach men to respect them.

To be honest, I had difficulty determining whether the movie bought Marston's line or regarded it as something he invented to excuse his sexual cravings. Maybe both things are true, but Evans does a solid job of showing that Marston keeps up a principled front no matter what unfolds.

To tell its story, the film employs a framing device in which the head of the Child Study Association of America (Connie Britton) questions Marston about the corrupting influences of Wonder Woman on the nation's youth.

Marston, Elizabeth, and Olive lived together for some time and took responsibility for raising children born to both women. The movie deals with the difficulties that manifested both inside and outside such a relationship. Things didn't always go smoothly.

Although it can be taken as a somewhat subdued manifesto for sexual and female liberation, the main reason to see Professor Marston and the Wonder Women is simpler: It may not be a great film, but it sure has one hell of a story to tell.