The man who was Deep Throat

Mark Felt takes us inside the world of the FBI during the days of Watergate. 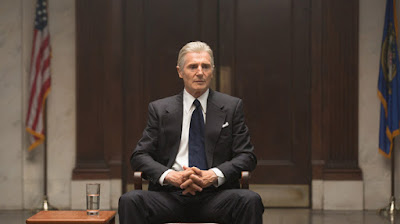 Although an FBI investigation into matters involving White House personnel can be related to today's headlines, Mark Felt: the Man Who Brought Down the White House feels a bit dated and remote. In telling the story of Mark Felt, the man better known as Watergate's Deep Throat, the movie attempts to take us inside the FBI during the time when Felt began talking to Washington Post reporter Bob Woodward.

Working from Felt's 2006 memoir, director Peter Landesman wraps his story in so much seriousness he might as well be preparing to enshrine it in a museum. For all its portent and heaviness, Landesman's movie about the messy work of saving the republic feels more like a weighty footnote than a main event.

As the title suggests, Felt -- whose identity was kept secret until 2005 -- occupies the movie's center. Felt, we learn, was passed over for the top FBI job when Herbert Hoover died. Despite the slight, associate director Felt insisted that he remained loyal to the agency.

As the movie tells it, he became a whistleblower because he refused to see the FBI compromised as investigations into the Watergate burglary began to heat up. He wanted to defend the integrity of an agency that wasn't supposed to be tarnished by political considerations. And maybe he was also furious and hurt about not getting the job for which he spent much of his adult life preparing.

Looking gaunt and severe, Liam Neeson plays Felt as a lawman accustomed to maintaining a stony front. A father estranged from a daughter who has been won over by the counterculture, Felt quietly endures his wife's (an underused Diane Lane) drinking and dissatisfactions, and he soon finds himself at odds with interim FBI director L. Patrick Gray (Martin Csokas).

An outsider to the ranks of law enforcement, Gray is put in the job to be a Nixon ally in the FBI after Hoover's death. Felt also finds himself at odds with FBI agent Bill Sullivan (Tom Sizemore), a guy who doesn't mind bending the rules and who becomes Gray's top assistant.

Scenes in which Felt interacts with fellow agents -- some of whom respected and feared him -- make us feel as if we're piercing FBI walls of secrecy, but that's not enough to elevate the movie to the level of importance to which it must have aspired.

Michael C. Hall has a nice turn as White House counsel John Dean, and Bruce Greenwood turns up as a journalist with whom Felt confided before he established a secret relationship with Washington Post reporter Bob Woodward.

For the most part, Landesman places the film squarely on Neeson's shoulders, using the actor's statuesque presence as a key to setting a somber tone. Nothing wrong with that, but this gloomy earnestness seems to be Mark Felt's only tone. The movie sticks to it as doggedly as Felt adheres to his desire to protect the FBI from concerns that he insists are irrelevant to law enforcement.

Mark Felt leans heavily toward portraying Felt as an American hero -- perhaps with the mud of accommodation on his shoes, but a hero nonetheless.

The movie tells us that in addition to his Watergate efforts, Felt was involved in dubious FBI efforts to find members of the Weather Underground. Felt was found guilty, but eventually was pardoned by President Ronald Reagan. This part of Felt's story plays like an afterthought. Besides, Felt remains noble to the end, refusing to pass any blame to subordinates.

There's no question that Felt was at the heart of events that shook the nation -- but Mark Felt wears its solemnity of purpose like a straight jacket, something that can't be said about All the President's Men, still the best Watergate movie of all.