A visually rich return to the future

What's real and what's not? Blade Runner 2049 wants to know, but it may cause some head scratching.. 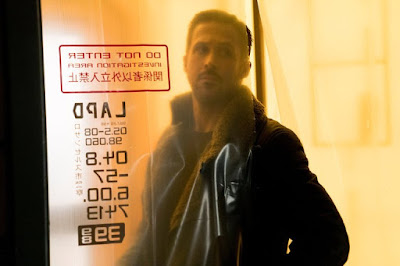 I'm not one of those people who consult director Ridley Scott's Blade Runner (1982) for philosophical guidance. I liked the movie well enough when I first saw it, but haven't joined the cult of enthusiasts who make regular return visits, often followed by heated debates about what, in the movie, should be taken as real and what shouldn't.

But there's no question that Scott's movie -- based on Philip K. Dick's novel Do Androids Dream of Electric Sheep -- set the pace for a lot of the dystopian sci-fi that followed in the wake of Blade Runner's noir-flavored foray into a dangerously decaying Los Angeles.

Now comes Blade Runner 2049, set some 30 years after the original. If you're looking for a beautifully realized vision of the world as the filmmakers think it might exist several decades from now, this new edition -- directed by Denis Villeneuve (Arrival) -- works hard to provide it.

Major credit accrues to cinematographer Roger Deakins, who makes ample use of yellow and orange hues to create a world that feels as if its enveloped in poisonous smog. Breathe at your own risk.

The desiccated landscapes of the movie's early going tell us that the world has been drained of its richness, its abundance having been exploited to the point where even a dead tree has become something a novelty. Technology may hold sway, but the Earth has become infertile.

We also learn, from opening title cards, that replicants -- genetically engineered creatures that are indistinguishable from humans -- are designed to be safe and servile. But Blade Runners, those who hunt down and "retire" replicants, still operate, searching for older replicants that had the audacity to make a case for replicant self-determination.

Prior to a screening, publicists read a statement asking critics not to reveal plot points and other surprises. OK, I'm not going to talk much about the plot except to say that it's not always easy to follow the one concocted by writers Hampton Fancher and Michael Green. I'd say that 2049 wants to be a deep-thinking detective story with a replicant hunter named K (Ryan Gosling) sent on a quest to ...

I won't say more, except to note that replicant-related peril puts the entire structure of the society Villeneuve depicts at issue.

Among the film's creations, you'll find Joi (Ana de Armas), an electronically produced holographic woman that adores K and offers no resistance when it comes to fulfilling her role as a fantasy. You'll also see Jared Leto as the head of a company that produces replicants in a performance that's too transparently spectral and weird. Leto's Wallace is served by a ruthless woman (Sylvia Hoeks) who's all business -- and bad business at that.

Even icier than she is on House of Cards, Robin Wright portrays the LAPD big-wig to whom K reports.

Gosling punctuates a purposefully inexpressive performance with small inflections, and -- if you've read anything about the movie -- you know that Harrison Ford returns as Deckard, only in a more worn-out version. The replicant hunter of the first movie evidently has been in hiding for the last 30 years, taking up residence in an abandoned Las Vegas casino where he can watch holographic Elvis projections and we can ponder a few similarities to the work of Stanley Kubrick.

The movie, which has its longueurs, perks up considerably when Ford arrives. I should tell you, though, that most of the time, I found myself in a state in which I seemed to be floating through the story, not really caring where it was going as I awaited the next intriguing bit of visual invention.

In his positive Hollywood Reporter review of 2049, Todd McCarthy astutely pointed out that the "style and tone" of 2049 owes more to Russian auteur Andrei Tarkovsky (Stalker) than to Scott's original. McCarthy's observation is correct but I wonder whether this approach -- creating an almost expanded sense of time -- doesn't deprive the picture of narrative interest while threatening to turn 2049 into a massive art project with a vision that exists more to be dissected than actually lived in. Food is now produced synthetically. As in the original, cars fly. High tech paraphernalia can be found even in the seedy tenement in which K lives. The ravages of climate change create snowfall in Los Angeles. When Leto's Wallace presides over a room in which a platform is surrounded by water that splays ripples of reflection across walls.

That's another way of saying, Villeneuve doesn't give us much reason to connect emotionally to much of anything in 2049.
I suppose 2049 serves up plenty of fodder for those who wish to philosophize about what's real and what isn't or to ruminate on how artificial intelligence changes our ideas about what it means to be human. But after the movie's sometimes taxing, 164-minute running time, I found that other more immediately pressing needs required attention.

"More immediately pressing needs demanded attention?" Lol! In other words, you had to pee, which at our age can distract us from the enjoyment of any movie.
Give it time, and this Blade Runner, like the original, will grow an audience. Thats what this kind of film does - it comes on like a slow acting drug, that wallops you in the beginning, then slowly drags you to a new place, and finally sinks in, long after you think you are done with it. The seeds that it plants in your psyche take time to grow into your subconscious, where you find yourself having feelings about the film that you didn't have at first. For some, the seeds don't germinate, and they are left with nothing to show but a feeling of 'what was that all about?' But for those whose seeds grow, a feeling of quiet awe and understanding begin to take shape. And we begin to see that Blade Runner is most importantly about our inability to ever fully know who we are and what this drama we are living is really all about. It also shows us a vision of a possible future that we may already be well on our way to creating - a future where the most basic emotion of all, love, like the trees that no longer exist, find it hard to find a place to grow. And yet, love, like the small flowers that Joe finds at the foot of the dead tree where Rachel is buried, still finds a way to survive.

I think the root problem of this movie is that it imposes many more pressing matters to think about, than the themes it WANTS you to think about. Each moment of this movie is consisted of illogical mess and it's plot is a series of unbelievable coincidences with a million to one chance of ever happening, that one finds themselves engulfed in wondering more about how come money couldn't be spent on a decent writer, rather than questions of reality and humanity.

a bizzare sex scene, for example, WOULD be mind boggling with deep questions of reality and humanity, IF it wasn't taking place at a time when the character taking a leisurely night of oinkage, a slow morning shower and a nice morning coffee should be hunted by the entire LAPD and should in fact be racing for time to find answers to his questions before he is caught and destroyed.

The questions of soul pale when you need to think what do a dozen bee hives eat in a mad max fury road wasteland, and if the writers are really so stupid to have a person put their hand into a beehive for no other reason than a pretentious metaphor.

gods, but this was terrible.

ITA with what adri says.. and I also say the real theme and spirit of the original was lost in goobblygook fantastic visuals so that there was NOTHING no one to hang your connection or emotional caring thru the movie with except 5 sec of Bautista's character. 10min in I stopped caring about Gossling's cop once it was shown he was connecting to a fake animae girl sex pixie holoprogram making his so called isolation living creepy pathetic.

LOLMAO at what James Rogers Bush said.. which is bloated egotistical blather denigrating people willing to call the Emperor Naked. We are many knowledgable ORIGINAL Blade Runner fans and in addition sci fi Phillip K Dick fans that agree with most of the poor Reviews giving the movie less than B+ due to STYLE/Deakins-Vilenvue PRETTY being touted as deep meaningful philosophical thought. When Fancher's story is exposed & the cleaned up the core 2049 story really is just the regurgitated memes already in post-apocalyptic film and media dressed up to affect the original movie's themes.