Spending time in the library 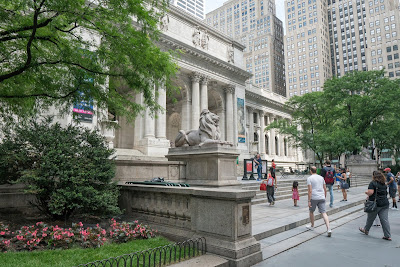 Thank God for Frederick Wiseman, the documentary filmmaker who makes films that proceed without benefit of any orienting narrative, quick cuts or agitated attempts to inject drama into scenes that unfold in real time. Wiseman's latest -- Ex Libris: The New York Public Library -- goes on for nearly three hours and I'd be lying if I didn't tell you that I found some of it tedious, particularly scenes in which library staff talk about the institution's digital future and its attempts to retain relevance. The way technology has impacted libraries is, of course, tremendously important, but I hated staff meetings when I had to attend them and watching someone else's proves no less enervating. But that's a price I willingly paid for allowing Wiseman to open the doors to an institution known to the world for its Fifth Avenue and 42 Street branch, the one with the staircase guarded by two lion sculptures on pedestals. Wiseman takes us through that branch of the library and some of its less recognizable outposts. Watching Ex Libris isn't like taking a guided tour; it's more like being given a pass to go anywhere in the library, accumulating impressions and drawing whatever conclusions we wish to draw -- if any. For me, Ex Libris was at its most involving when Wiseman takes us to Q&A sessions with such notables as musician Elvis Costello or authors Ta-Nehisi Coates and Richard Dawkins. Wiseman also shows us that the library has a social dimension, conducting after-school programs, for example. Don't be misled by the fact that I've offered only a short review of Wiseman's 197-minute movie. By no means take that as a suggestion that Ex Libris should be dismissed. Like many of Wiseman's other films -- most recently In Jackson Heights (2015) -- Ex Libris functions as a kind of time-capsule document, something that could be viewed years from now by those who want to understand something about the way institutions functioned in our tumultuous times, in this case, trying to keep pace with change while remaining faithful to its overall mission.