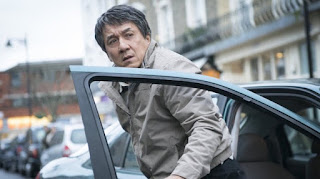 No one has made martial arts feel more joyous than Jackie Chan. Throughout his long movie career, Chan has been involved in some of the most intricately brilliant fight scenes ever filmed, many of them choreographed in ways that tip over into physical comedy.

One assumes that the always likable Chan, now 63 and perhaps past the point where he wants to risk more injuries, may not be able to continue at the bruising pace he once set. So it's hardly surprising to see Chan taking another tack in director Martin Campbell's The Foreigner, an adaptation of an insensitively named 1995 Stephen Leather novel called The Chinaman.

In The Foreigner, Chan's work takes a somber, determined turn as he plays a London father whose daughter is killed during a bombing by a group that identifies itself as a new incarnation of the IRA. Having given up his career as a hitman, Chan's Quan Ngoc Minh resumes action, setting out to avenge his daughter. Quan's mission of revenge brings him into the orbit of a former IRA man now serving in the government, Pierce Brosnan's Liam Hennessy.

Quan believes that Brosnan's character knows who's responsible for the London bombing. Having gotten nowhere with British counterintelligence agents, Quan insists that Hennessy name names. If the law won't provide justice, Quan will get it for himself.

It takes time for Chan to reveal his character's lethal side. Quan bows when he meets people and generally presents himself as an obscure restaurateur who runs a London takeaway joint. Few know that Quan was raised in Vietnam, where he was trained by US special forces. As a result, Quan knows how to build bombs and kick butt. He can commit to a mission with unrelenting persistence.

Quan heads to Belfast, following Hennessy to his country estate. There, Quan steadily raises the ante by setting off a series of increasingly powerful explosions. Meanwhile, Hennessy must deal with his angry wife (Orla Brady), the British government bureaucracy and a variety of other problems, including the ire of an IRA man who believes Hennessy has sold out men who once were his bothers in arms.

Campbell treats the material more as a political thriller than a martial arts display, and the whole package winds up as a hard-boiled entertainment that's not afraid to strike at point-blank range even if it doesn't quite manage to earn credit as more than another darkly hued movie shot through with the customary bitter undercurrents.