A cleric caught in a web of torment

Paul Schrader’s First Reformed, a movie with which to reckon. 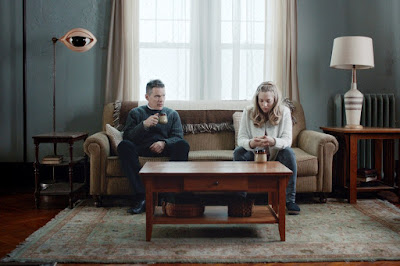 In director Paul Schrader's First Reformed, Ethan Hawke plays a minister who presides over the First Reformed Church, a once-proud but diminished church in upstate New York. Hawke's Reverend Toller wears a constricting clerical collar that seems more of a choice than a requirement. When he's outside of the church a long black overcoat gives him an ominous look, as if he's wrapped himself in a cloud of heavy gloom.

Toller stands on an altar built from personal guilt. As a former military chaplain, he sold family tradition to his son, urging him to enlist in the military. The young man followed his father's advice and was killed in Iraq. Toller's wife subsequently left him. From the look of things, Toller has spent the ensuing years turning his life into a form of punishing penance.

Toller's church is part of a larger organization run by a minister (Cedric Kyles, a.k.a. Cedric the Entertainer) who understands the business of operating a mega church and wants to create a successful event as First Reformed approaches its 250th anniversary, an occasion that's to be celebrated with a reconsecration ceremony.

Worried about Toller's obvious depression, Kyles' Pastor Jeffers cautions that even Jesus didn't spend all his time in the Garden of Gethsemane. He thinks Toller should lighten up.

Both Toller and his church seem to be stuck in a harsh spiritual winter. Once a stop on the Underground Railroad and a bastion of fiery abolitionist morality, First Reformed now tries to get by with a depleted gift shop. It has become a minor tourist attraction.

Schrader broadens the movie's thematic reach by linking the future of the church to ecological plunder. Jeffers and Toller are supported by Balq Industries, a company run by Edward Balq (Michael Gaston), a businessman who represents a more-or-less American attitude about separating business practices from religious dictates that might -- if taken too seriously -- interfere with those same practices. Balq is one of the country’s major polluters.

Sparse and austere, First Reformed does have a plot of sorts. Mary (Amanda Seyfried), a young pregnant wife turns up at First Reformed to talk to Toller. It turns out Mary's husband (Philip Ettinger) does not want her to bring a baby into a world that he believes is headed toward an irrevocable environmental catastrophe. Mary wants Toller to convince her husband to support her pregnancy.

Toller visits Ettinger’s Michael to see what he can do to persuade the young man that all hope is not lost. Schrader then does something truly rare in movies: He allows two characters -- Toller and Michael -- to engage in an extended philosophical conversation, the kind with consequences. If the world is bleak, diminished and joyless, can survival still have any meaning?

Michael soon answers the question for himself by blowing his brains out with a rifle.

Michael, who has flirted with ecoterrorism, serves as a kind of catalyst that pushes Toller deeper into a torment that's expressed in a journal that he keeps and which serves as the movie's narration. Toller, by the way, already is suffering from a serious but unspecified illness that he insists on ignoring. He urinates blood, the life leaking out of him.

Toller apparently has had a fleeting affair with a choir director (Victoria Hill) who clearly cares about him and fears that he’s unraveling. In a moment of swift and perhaps unforgivable cruelty, Toller rejects her.

The increasingly distraught Toller begins to wonder whether Michael may have been right. Perhaps an act of terror, namely a suicide bombing, is the only way to draw attention to the monstrous crimes that are being committed against God's creation.

Schrader, who wrote Taxi Driver, is no stranger to compelling but tormented characters. Although all the actors in First Reformed are good, Schrader puts the movie squarely on Hawke's shoulders. It's no easy job. Hawke plays a character who lives on a fault line of irreconcilable contradictions.

At one point, Toller even offers a version of the famous F. Scott Fitzgerald definition of a first-rate intelligence: "the ability to hold two opposed ideas in mind at the same time and still retain the ability to function."

In Toller's case, those contradictory ideas involve pain and pleasure, love and the futility, guilt and redemption. Schrader pushes those ideas to extremes that result in an ending which is both unforgettable and which surely will puzzle many viewers. I won't describe it here but I believe it is intended as a moment in which Toller's fragmented soul achieves its unity.

The movie's images are spartan and purposefully depleted -- right up until the point when Schrader includes a fantasy scene in which Toller and Mary float over the world, a visual precis of the movie’s diagnosis of the material world that begins with a natural idyll and ends with ecological catastrophe.

For those who are new to Schrader's work, it's worth knowing that when he as a young film critic, he wrote an important book: Transcendental Style in Film: Ozu, Bresson, Dryer. Those familiar with that book and with the work of the aforementioned directors will note the way their influences play out in First Reformed. (The book has been republished with a new forward and with Schrader's observations about additional directors.)

The style to which Schrader refers has to do with holding images until they teeter on the edge of boredom, of not providing a lot of visual cues but demanding that viewers explore the images that are put in front of them, of limiting the use of music so that when it’s heard, its impact is heightened, of providing eventual release for emotions that have been tamped down throughout.

Schrader, a man of serious concerns, has managed to spend a life in film. He has written for Scorsese -- not only Taxi Driver, but Raging Bull (as co-writer), The Last Temptation of Christ and Bringing Out the Dead. His own movies include American Gigolo, Blue Collar, a remake of Cat People, Mishima: A Life in Four Chapters, and Affliction.

Schrader can be a confounding figure who both understands Hollywood and who follows an auteur's lonely path. I'd be lying if I told you that I totally "get" Schrader, but I will tell you that First Reformed stands as a stark work that resounds with cinematic echoes (Bresson's Diary of a Country Priest, for example) and yet feels rooted in the present moment of threat, disunity and unbridgeable moral gaps. It is a work that isn't' afraid to look at something most movies try their best to avoid: deep despair.