A so-so adaptation of a Chekhov play. 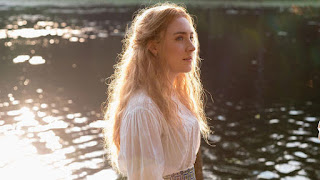 The Seagull, a filmed version of Russian dramatist Anton Chekhov's 1896 play has a bumpy beginning, so much so that Chekov's language sounds a bit too contemporary, even a little trite. In the hands of director Michael Mayer, it takes some time for Chekhov's drama about a group of unhappy, self-absorbed people to find its rhythm, but it eventually does. Annette Bening plays the signature role of Irina Arkadina, an aging actress who has taken to the country with her new lover, the writer Boris Trigoren (Corey Stoll). Irina's son (Billy Howle) fancies himself a writer but has yet to establish himself in ways that allow him to be taken seriously. A fine cast also includes Saoirse Ronan as Nina, the play's aspiring actress and naive innocent; and Elizabeth Moss, as the perpetually embittered Masha. Masha always wears black because, she says, the color matches her life. Mayer's adaptation works in fits and starts, but if you're interested in the way a new group of actors approach important theatrical roles, Seagull is worth seeing for Bening's warbled, agitated Irina and, even more so, for Stoll's Trigoren, a writer whose understated personal ambitions can be alarming. Mayer's rendition of the first in a quartet of Chekhov's great plays that continued with Uncle Vanya, Three Sisters and The Cherry Orchard preserves enough of Chekhov’s thematic intensity to to avoid disaster. No one who tackles Chekhov entirely can miss the troubled nature of characters whose momentous concerns often seem like overwrought preoccupations. How grand we all are in our embrace of the fleeting and the trivial.
Posted by Robert Denerstein at 2:10 PM