A marriage not made in heaven

On Chisel Beach shows the life-altering consequences of a single evening. 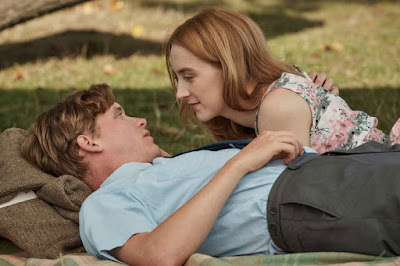 Saoirse Ronan and Billy Howle are exceptionally good in theater director Dominic Cooke's On Chesil Beach, an adaptation of a novel by Ian McEwan, who also wrote the movie's screenplay.

The movie tells the story of awkward newlyweds trying to navigate the shoals of sex on their honeymoon by the sea, a situation that gives McEwan an opportunity to explore the sad consequences of attitudes that prevailed in the pre-sexual revolution days of the early 1960s.

On the surface, both Florence Ponting and Edward Mayhew are promising young people. She's a classical violinist with a bright future as a professional musician. A smart history student, Edward hails from a less sophisticated background than Florence. He's more of a rock n' roll guy, but he falls hard for Florence, he did well in college and he seems in possession of a good spirit.

Scenes in the newlywed's hotel room at Chesil Beach in Dorset are interrupted by flashbacks that show the lively courtship between Florine and Edward and their sometimes uneasy introductions to each other's families.

Florence's father (Samuel West) follows a strictly business ethos, even on the tennis court. Her mother (Emily Watson) teaches at Oxford. Poor Edward is supposed to join the Ponting family business, a prospect with about as much appeal as a stint in solitary.

Edward's father (Adrian Scarborough) seems like one of those nice but ineffectual men who has spent his life trying hard without getting a grip on much of anything. Edward's mother (Anne-Marie Duff), a woman who suffered brain damage as the result of an accident, presents a particular challenge. She unselfconsciously wanders about in the nude, unmoored from ordinary restraints.

Not surprisingly, Florence and Edward's wedding night turns into a nightmare: Edward is fumbling but aggressive; Florence finds the idea of sex a bit repellant. Both are virgins.

After an unsuccessful attempt to consummate the marriage, Florence and Edward wind up on the desolate, rocky Dorset beach where it becomes clear that an impatient Edward can't transcend his ideas about marriage. Florence seems the more sensitive of the two but more than a bit unrealistic.

In its final going, the movie skips ahead to show us (perhaps ill-advisedly) what happened to Florence and Edward at various points after their fateful day at the beach.

The movie's emotions derive from Edward's regret. Thematically, we're probably meant to conclude that had these two come of age in the 1970s rather than the 1950s, their lives might have been entirely different. As it stands, Florence and Edward are young people whose lives are shaped by their inability to deal with intimacy -- either emotional or physical.

In all, On Chisel Beach is a well-acted movie that feels more slender than it probably should, neither an insular chamber piece nor a full-blown look at crippling sexual mores. It's not easy to think expansively about a movie that tries to make an awful lot out of one wretched night.