The pope speaks his mind -- from the heart

Director Wim Wenders showcases the work and ideas of a pope who wants to establish a church of the poor. 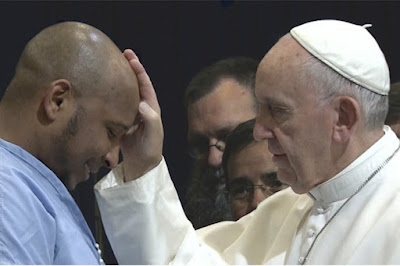 Director Wim Wenders has made an early bid for the canonization of Pope Francis.

Wenders’s laudatory documentary — Pope Francis: A Man of His Word — serves as an inspiring, if mostly unquestioning, look at the priest who heads the Roman Catholic Church. Looking straight into the camera, the pope speaks his mind. Wenders gives the pope a platform that creates the intimacy of a private audience with the pontiff.

In keeping with Francis’s disdain for the pomp of the Vatican, Wenders goes beyond interviews, spending much of the movie's time focusing on the pope's travels, journeys that take the pontiff to migrant camps to Auschwitz to a hospital in the Central African Republic and to lots of other places that aren't typically visited for pleasure.

Not much that the pope says would cause arguments among people of any faith. Moreover, Francis projects a natural warmth that contrasts mightily with his predecessor, the retired Benedict XVI, a man whose theological interests seemed to outweigh his people skills.

For those who aren’t Catholic, there’s much to admire about Francis's social conscience, but Wenders isn't big on follow-up questions.

Wenders’s documentary mentions but doesn't dig deeply into controversial issues such as child abuse within the Church. Wenders also doesn’t do much to explore the split between conservative Catholics and the more progressive followers of Francis, a rift that has found its way into a variety of recent discussions about the future of Catholicism.

Wenders includes the pope's now famous remark on gays. "Who am I to judge?" The pope tells reporters on a Vatican flight that if a gay person seeks God, he wouldn't judge that person. Does that mean that he would judge gay atheists?

Wenders also mentions Laudato Si, Pope Francis's controversial and comprehensive encyclical on the environment, which includes the assertion that wealthy countries are destroying poorer nations, a radical thought, but Laudato Si also includes what isn't talked about here: the pope's argument that population control doesn't address the problems of the poor, an observation that leads to a reinforcement of the Church's anti-abortion stance.

I can't read Wenders's mind, but I wondered if he weren't trying to present a universalized version of the pope that skates past sectarian concerns, questions that almost always produce divisiveness.

To that, Wenders's supporters might say that the director was far more interested in character than controversy. For me, the keywords in the movie’s title are “a man.” Wenders's camera reveals a life-sized pope, an approachable figure who took the name of Saint Francis of Assisi as a mark of humility, a decision that leads Wenders astray. Re-enacted footage of the 12th-century saint who inspired Francis to take his name could have been discarded. A slender account of the saint's life disrupts the movie's flow without adding much to our understanding.

The title of Wenders's documentary suggests that Francis lives as he preaches, insisting on a joyous approach to God that sounds more appealing than clerical finger-wagging.

And when it comes to expressing ultimate values, Francis keeps his feet planted firmly on the ground. He elevates the value of a smile and a sense of humor over self-seriousness and somber piety.

Wherever your political and religious sympathies lie, you'll discover a leader who cares about and identifies with the poor and who seems as comfortable among them as he is behind a pulpit.

Some may find it difficult to see Pope Francis: A Man of His Word as anything more than hagiography, but it's impossible to deny Francis’s appeal to a deep sense of humanity that he himself reflects. Whatever else can be said about Pope Francis, he comes across as a man who would like nothing more than to awaken our better angels.

Email ThisBlogThis!Share to TwitterShare to FacebookShare to Pinterest
Labels: Pope Francis: A Man of His Word, Wim Wenders