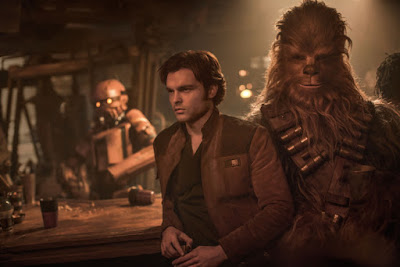 Director Ron Howard took over Solo: A Star Wars Story after the film already was five months into a production that, at the time, was being directed by Chris Lord and Phil Miller. Working from a script by the father/son team of Lawrence Kasdan and Jonathan Kasdan, Howard has given the resultant movie a bit of old pro feel -- albeit with a lot of fresh young faces.

Solo tired me out with a lengthy action sequence about three-quarters of the way through, but overall the origins story of Han Solo proves an entertaining enough addition to the Star Wars galaxy to drown out quibbles.

As the movie’s title promises, Solo tells the story of Han Solo and answers questions that, frankly, I’ve never spent a minute thinking about: How did Han get his name? When did he team up with Chewbacca? Was Han always a roguish, wisecracking space jockey?

The movie begins with Han (Alden Ehrenreich) scuffling to flee a harsh life on the oppressively trashy Planet Corellia, which he tries to escape with girlfriend Qi'ra (Emilia Clarke). Han makes it out. Qi'ra doesn’t.

Ford was 34 when the first Star Wars movie was released. Ehrenreich is 28. He seems to have mastered some of Ford’s attitude, occasionally revealing trace elements of Ford’s jaundiced ways in an expression or a look, but it's best to accept Ehrenreich as Solo and let go of comparisons.

The same goes for Donald Glover who plays Lando Calrissian. Solo and Lando meet at a card game that Howard handles crisply and with winking humor.

Although I tried not to nitpick my way through Solo, I will say that I had more trouble imagining that Glover, entertaining in his own right, grew into a character who looks like Billy Dee Williams, the original Lando.

All of this seems part of the now familiar Hollywood dictum that well-enough never should be left alone. And at some point, you have to wonder whether criticizing certain kinds of movies makes about as much sense as complaining about the local Walmart for not carrying Gucci or Versace.

I don’t mean to suggest that there’s no skill or quality in franchise filmmaking and it certainly doesn’t occur at bargain prices, but one presumes that the real reason that Solo exists is because, as the subtitle suggests, it’s part of the Star Wars brand.

And as you might speculate after perusing Ben Fritz’s new book, The Big Picture: The Fight for Hollywood’s Future, Harrison Ford and Billy Dee Williams are expendable. Han and Lando, not so much.

Howard tries and often maintains the cliff-hanger spirit that Lucas tried to infuse into all the Star Wars movies, and he includes an exciting sequence atop a speeding train that amps up the tension and action.

Paul Bettany provides one of the movie’s best characters. Bettany plays Dreyden Vos, a cruel crime lord who presides over a nightclub. Thanks to unseen plot developments, Vos turns Qi'ra into a kind of personal consort.

Creatures abound with Phoebe Waller-Bridge doing a nice job voicing a droid that results in one of the movie's emotional high points. I also liked Rio Durant, a four-armed pilot who flies with Beckett, but don't take that as a suggestion that I'd like to see a movie based on Rio's backstory.

Of course, rebellion and the evil Empire create thematic winds -- maybe breezes in this case -- that blow through the movie as reminders of the large stakes that animate the main-event Star Wars movies.

Every now and again, the classic Star Wars musical theme turns up, a reminder that we're still in the teeming Star Wars universe. I wouldn’t have objected to hearing more of that theme, but Howard seems intent on striking a balance so that the movie is recognizably Star Wars while standing on its own. For the most part, he succeeds.