When motherhood becomes a nightmare

Charlize Theron and Mackenzie Davis play an entertaining duet in Tully, a comedy about the staggering burden of motherhood. 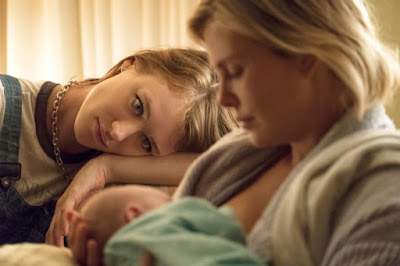 For Marlo, three is definitely not the charm.

We’re talking about Marlo’s third pregnancy, an event that has added much weight to her otherwise well-proportioned frame. Tully -- the latest collaboration between director Jason Reitman and screenwriter Diablo Cody -- introduces us to a very beleaguered mom, played by Charlize Theron. Theron reportedly gained 50 pounds for the role. I leave it to you to decide whether such body stress is justified in the pursuit of one’s art, but Theron never has been one for half measures.

As Aileen Wuornos in Monster, Theron obliterated her beauty to portray a serial killer, the most notable example of the actress's willingness to undergo a physical transformation at the expense of her movie-star looks.

Marlo, whose size and temperament separate her from those who surround her, struggles with issues that pit her sense of well-being against the kind of physical exhaustion and emotional depletion that are fueled by tending to an infant and two additional siblings.

Because her prepartum life isn't exactly wonderous, Marlo carries a weight that’s more than physical. Marlo's marriage has lost all traces of romance. Marlo's bystander of a husband (Ron Livingston) would rather play video games in bed than snuggle up to his wife. It's not that he doesn't care about his wife and kids; it's more that he's lost in his own world.

To further complicate matters, Marlo already has two children, one of whom (Asher Miles Fallica) taxes her patience because of extreme emotional problems that find him terrified by the sound of flushing toilets or relentlessly kicking the back of mom’s seat while she’s driving.

There’s a daughter (Maddie Dixon-Poirier), as well. The daughter seems to pose no out-sized problems, but still ... she's another kid with needs.

Every over-taxed movie mother needs a contrivance to move things along.

Tully's arrives in the form of a gift from Marlo’s affluent brother (Mark Duplass). He offers to pay for a night nanny, a young woman who'll take care of the newborn's overnight needs, thus allowing Marlo to get some much-needed sleep.

At first, Marlo resists, but she becomes so frustrated that she calls in a night nanny.

Enter Tully, the movie’s title character. As played by Mackenzie Davis, Tully is a dream-come-true. She has a great personality. She's in her 20s, but totally understands Marlo and encourages her to take advantage of the service in ways that Marlo hadn’t anticipated. She not only brings the baby to Marlo for night feedings but cleans up the house and ... well ... eventually even awakens Marlo's husband's slumbering libido.

Credit Davis with a showcase performance: She gives Tully such a major helping of verve and savvy that it begins filtering through the entire movie.

As he did in his best movies (Thank You for Smoking and Up in the Air), Reitman wraps Tully's social and psychological interests in a glossy entertainment package. Cody, who previously worked with Reitman on Juno and Young Adult, has been known to produce snarky one-liners but here she leans toward the dark side of Marlo's anger and depression without quite toppling into either.

When Marlo visits her son’s school she initiates an ugly confrontation with the school’s principal over her son’s behavior; Marlo flips onto the dislikable side of the ledger. She’s belligerent with the principal, a woman who genuinely seems concerned about her son's ability to fit into the environment of this private school. Marlo isn't always a joy to be around.

Tully may speak loudly to women who can appreciate the overwhelming tsunami that has smashed on the beaches of Marlo's middle-aged life, a point at which the door has all but slammed shut on her youth.

To make that point, the movie eventually offers a throwback scene in which Marlo and Tully return to Marlo’s old stomping grounds in the Bushwick section of Brooklyn for a night on the town, a foray into the kind of nightlife for which Marlo has become decidedly too old.

It’s difficult to say more without introducing major spoilers, so I’ll simply say that the movie’s ending wraps things up a little too neatly — and, dare I say, with just a hint of a cop-out.

Tully can be seen as another look at a woman on the verge of a nervous breakdown, a popular enough movie theme and one that still has plenty of life in it -- even if, in Tully, it doesn't produce a conclusion that's as convincing as Theron's performance.