Melissa McCarthy parties on -- and on

A mother joins her daughter as a college student in Life of the Party. 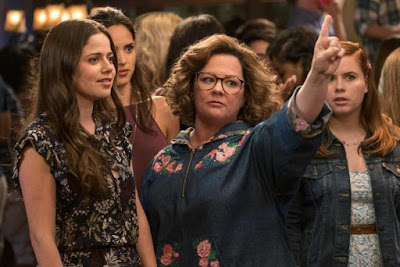 It’s entirely possible that a woman who gave up her career ambitions when she committed to marriage and raising a daughter might return to college to complete her senior year, particularly after being dumped by her husband of 23 years. It’s also possible that enough time would have passed that the woman's daughter could have arrived at her senior year in college, as well. It's even possible that mother and daughter would find themselves enrolled at the same university.

Considering all this, it’s not too much of a stretch to view Melissa McCarthy’s new comedy, Life of the Party, as a plausible effort to show what might happen if such a mother/daughter situation developed in the hallowed halls of fictional Decatur University.

But that’s where credibility ends and comedy (or what passes for it) begins in Life of the Party, a movie that provides an answer to a question you probably haven’t spent much time considering -- at least I hope not. What could be less appealing than an R-rated McCarthy comedy directed by her real-life husband Ben Falcone (Tammy and The Boss)? Yep, it’s a PG-13 rated comedy from the same team.

At first, Deanna’s daughter’s (Molly Gordon) expresses embarrassment at having her mom around campus. But without much by way of transition, mother and daughter find a new bond as gal pals.

Daughter helps Mom with a fashion makeover that takes her from prim and proper to a woman who appeals to a college kid (Luke Benward) with whom she has hot sex. As Deanna puts it, she rocks his world.

Of the supporting cast, Maya Rudolph, as Deanna's best friend, gives a ribald edge of an otherwise staid suburban woman. Matt Walsh is wasted as Deanna’s ex, a man who has taken up with a realtor (Julie Brown) who bosses him around and immediately sells the home in which he and Deanna lived. The house was in his name.

Deanna has a sullen, self-isolating roommate (Heidi Gardner), but the sisters in her daughter's sorority are a fairly generic group for whom Deanna morphs from a fish-out-of-water woman into an inspirational figure.

Supposed high points protrude self-consciously from the mix. These include a scene in which Deanna and her college cohorts trash her ex-husband’s wedding, a scene at an 80s themed party at which Deanna dominates the dance floor, and a restaurant scene which Deanna confronts her former husband.

The restaurant scene lands some laughs, perhaps because it contains one of the movie's few surprises.

The only moment I found slightly amusing was a bit of physical comedy in which Deanna fumbles her way through an oral archaeology mid-term, engaging in battle with a recalcitrant lectern. Maybe I’m clutching at straws but the bit reminded me of Jerry Lewis. A little?

Otherwise, Life of the Party suggests that the filmmakers might do well to return to comedy school for a refresher in how to avoid the kind of formula traps that tend to neuter comic potential.