When ghosts have yet to die 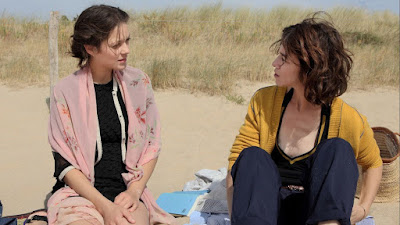 By most measures, French director Arnaud Desplechin’s Ismael’s Ghosts should be dismissed as hopelessly muddled, slightly pretentious and loaded with self-conscious time shifts that can confuse more than they clarify. But Desplechin’s movie, I think, deserves more nuanced consideration, particularly if you think of it as a rambling meditation about a filmmaker who’s battling ghosts of his past, one of which turns up in the form of a real person.

Desplechin begins his film as if it were a thriller about a spy named Ivan Dedalus, a film-within-a-film ploy that suggests Desplechin’s desire to turn Ismael's Ghosts into a kind of cinematic playground. Don’t become overly involved in this thriller because you’ll soon learn that you've entered the imagination of writer/director Ismael Vuillard (Mathieu Amalric), a director who's working on the screenplay for the movie we’ve been watching.

A second rank filmmaker, Vuillard never seems to have matched the work of his former father-in-law Henri Bloom (Laszlo Szabo), a director who’s not afraid to allow his ego to spill over into rudeness while insisting that his behavior constitutes an essential form of rebellion.

We also learn that Vuillard's former wife (Marion Cotillard) disappeared 21 years ago. She since has been declared dead but Vuillard can't abandon her memory.

The movie's set-up creates many boats for Desplechin to rock. Vuillard is the midst of a new relationship with Sylvia (Charlotte Gainsbourg) when a woman turns up claiming to be the long-lost Carlotta, the wife he can’t forget.

To add to the film’s already challenging density, we also learn that the spy in Vuillard’s movie is based on the life of his real brother, a man who has little respect for Vuillard.

All of this information slides into view without much concern for either chronological or even logical coherence.

But Desplechin isn’t attacking the formal conventions of cinema so much as he’s recreating Vuillard’s fevered world, rendered in rendered in alternating strokes of joy and desperation by Amalric, whose portrayal of Vuillard does little to glorify the role of the film director. In Amalric’s hands, Vuillard becomes a mess, a man who can annoy, amuse and even plunge — a little too willingly perhaps — into moments of existential despair.

As a woman who refuses to explain herself, Cotillard adds an aura of mystery and intrigue. Can Carlotta reinsert herself into Vuillard’s life? Will her sudden reappearance cause her father to die of shock? What to make of what Carlotta's claims that she was in a loveless marriage in India during the years in which she vanished from Paris?

Gainsbourg’s Sylvia, an astrophysicist by trade, might be the only character who isn’t overcome by waves of personal confusion.

Did I mention that the spy in Vuillard's movie (Louis Garrel) keeps turning up; snippets of thriller that Vuillard is making punctuate the blurry narrative.

I wouldn’t argue with those who find Ismael’s Ghosts stuffed to the point where it bursts any attempt at significance.

You also could tie yourself in knots trying to make something of Desplechin’s literary references, saddling characters with names that recall James Joyce — Bloom and Dedalus, for example. I took all this rarified name-dropping as little more than wry gamesmanship on Desplechin's part.

It helps not to take Ismael’s Ghosts too seriously. Desplechin may be poking fun at us, as well as at characters who get lost in the maze he creates. Of course, the movie frustrates but its confusions push Desplechin toward something vital, the way his characters respond to the disjointed absurdities with which he confronts them.