Love and conflict in a Jewish community 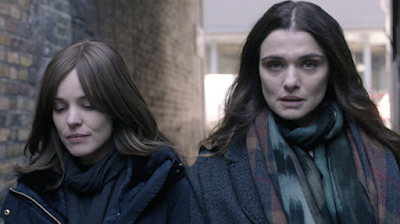 Sebastian Leilo, who directed the Oscar-winning foreign-language film, A Fantastic Woman, moves from his native Chile to Britain to tell the story of a love affair between two women, one of whom is married and living in a small Orthodox Jewish community in North London.

This description may sound as if Leilo's Disobedience wants to pose yet another argument for acceptance and tolerance while vilifying an Orthodox community for its myopic vision. Thankfully, the movie does neither of those things.

Instead, Disobedience spreads the lives of its characters across chasms of contradiction that aren't easily traversed: The movie seems less interested in taking sides than in bringing its principal characters to points at which they must make critical personal choices.

Whatever you make of Disobedience, it’s difficult not to recognize the fine work of Rachel Weisz and Rachel McAdams as women who find themselves trying to come to terms with their pasts in what appears to be an impossibly conflicted present.

Weisz's Ronit had an affair with Esti when the two were much younger. Ronit then fled the community in which she grew up to pursue a career in photography. She now lives in New York. McAdams's Esti remained in London and has since married.

Ronit's return to North London for her father's funeral lights a fuse of love and desire between the two women that burns throughout the movie.

To further complicate matters, Ronit's father -- known in the movie as The Rav -- led the community in which much of the drama takes place. Esti's husband Dovid (Alessandro Nivola) is in line to take over the late rabbi's position.

Weisz makes it clear that Ronit loved her father, even though he denied her existence once she left home and Orthodoxy, an act he would have seen as a betrayal of everything he valued, perhaps even an affront to God.

Working from a script that he wrote with Rebecca Lenkiewicz and based on a novel by Naomi Alderman, Leila carefully uncovers the agonies the women endure. Although he receives less attention Esti's husband Dovid has conflicts of his own. The rabbi took young Dovid under wing and made him his chief disciple, which means that, in their youths, Dovid and Ronit shared a kind of brother/sister relationship. Dovid doesn’t know how to embrace the rebellious Ronit yet he can’t bring himself to reject her, either.

Esti can't (and ultimately doesn't) deny her sexual desires. En route to its conclusion, Lelio includes a scene in which Ronit and Estie renew their sexual relationship. The scene leans toward the explicit, but the movie would have been meaningless without it. The desire and love these women feel for each other had to be made tangible.

But to McAdam's credit, she also understands that Esti is not fundamentally at odds with the beliefs of her community. She's nourished by them.

The Jewish life Leilo presents can seem a bit austere and I've never been to a synagogue in which prayers were sung in perfect harmony, as they are here, but Leilo makes us eager to find a resolution for his characters, each of whom earns some sympathy.

Disobedience remains true to its basic concerns about the relationship between choice and responsibility. I'm not entirely sure that the material is always up to the task, but Weisz, McAdams, and Nivola make the inner lives of these characters vivid, real and affecting.