A dark comedy about our political divide 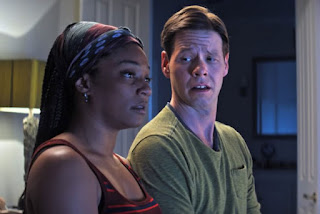 There probably couldn't be a more timely movie than The Oath, a dark comedy about the political divide that's splitting American families and turning former friends into enemies. Timely, yes. Successful, no. Ike Barinholtz stars and directs a comedy in which he plays Chris, a politically progressive news junkie who can't get away from the TV long enough to give us outraged brain a rest. Not a bad idea for the current moment and the movie includes a twist that's just plausible enough to give you the shivers. An unnamed president of the US has asked everyone in the country to take a loyalty oath. Swearing allegiance is voluntary, but it's also clear that not taking the oath will lead to ostracism, discomfort and perhaps worse. An ill-used Tiffany Haddish plays Chris's wife, another progressive, but not one who's not willing to turn every occasion (say, Thanksgiving) into a political battlefield. Jon Barinholtz (real-life brother of Ike) turns up as Chris's on-screen brother. He and his wife (Meredith Hagner) have signed the oath and don't consider it a big deal. Chris's sister (Carrie Brownstein) sides with those who refused to sign but might not be steadfast in her resolve. Nora Dunn and Chris Ellis portray Chris's parents. All of this makes for an insanely tense Thanksgiving and the movie might have worked had Barinholtz not pushed everything to an even further extreme when two "thought-police" cops (John Cho and Billy Magnussen) show up to harass the non-signers. Suddenly, we're in the middle of a hostage movie that plays like a ham-handed riff on Michael Haneke's Funny Games. As a character, Chris might have worked in small doses, but as the centerpiece of a movie, he becomes a pain in the butt, even if you happen to share some of his views. Last seen in Blockers, Barinholtz carries the comedy way over-the-top. In the end, he tries to undo the movie's malevolence with cop-out last-minute reveals. Barinholtz deserves credit for bravely leaping into already roiled political waters. Too bad his big gamble doesn't pay off.